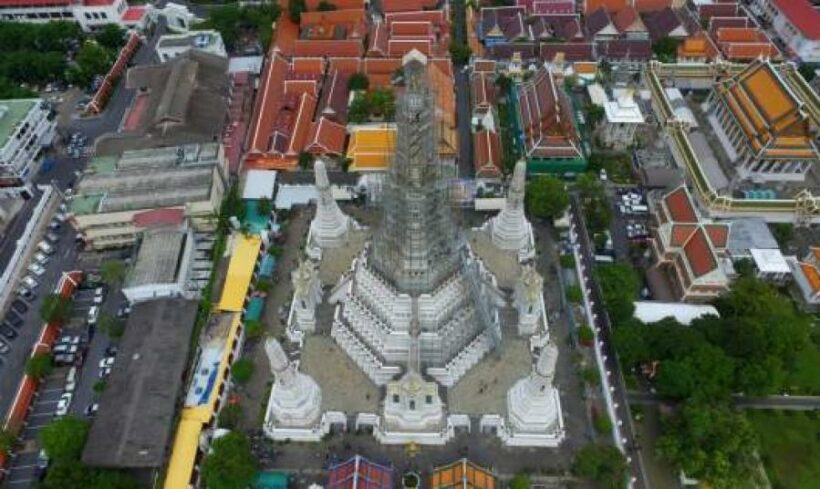 BANGKOK: Restoration work on the world-famous stupa ‘Wat Arun’ in Bangkok, which has been underway since 2013, is expected to conclude next month.

The Fine Arts Department announced Friday that it would install decorative lights on the ancient structure and flip the switch from September onward.

Built in the Ayutthaya period, Wat Arun is also widely known as the ‘Temple of Dawn’. The original name of this temple was ‘Wat Makok’. King Taksin, however, renamed the temple ‘Wat Chaeng’ as some believe that the King reached this temple at dawn when he intended to establish Thonburi as the new capital in 1767.

After a series of restorations over the next century, including extension of the stupa’s height in the reigns of King Rama II and III, the temple was bestowed its current name, ‘Wat Arun Ratchawararam’ by King Rama IV, who also led another round of restorations for the temple.

The Culture Ministry said that together with its partners, it would organize celebrations of the stupa between December 27 this year to January 5 next year, helping to kick off Thailand’s Tourism Year 2018.

The celebration will feature a ceremony to pay homage to King Taksin, light-and-sound shows, cultural performances, and a royal barge procession showcase.

There will also be Nang Yai (shadow puppet) performances, alms-giving ceremonies, and a traditional Thai market. Rounding out the events will be exhibitions on ‘the History of Wat Arun Ratchawararam’, ‘250 years of Thonburi City’s history’ and a display of award winning photos under the theme ‘Wat Arun from the past until the present’.

The celebration coincides with the anniversary of King Taksin’s accession to the throne on December 28.

Thailand ‘among top 20 most dangerous countries’ to visit