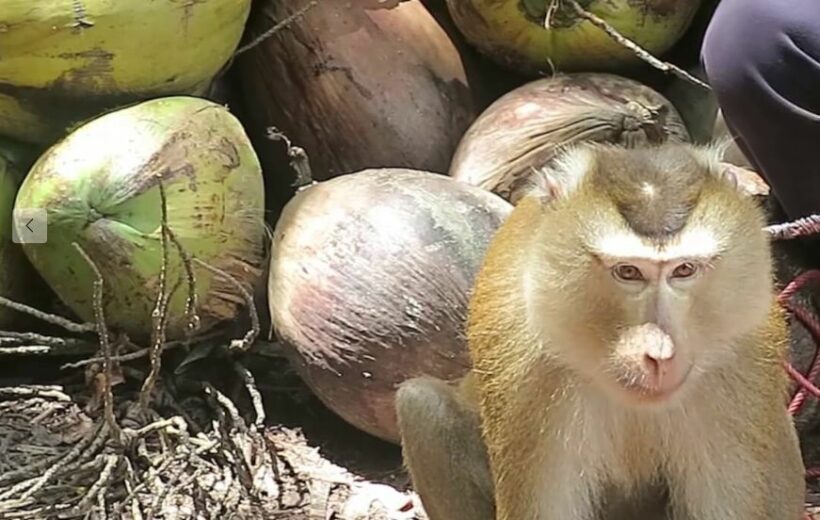 Grocery stores throughout the United States are cutting ties with the Thai coconut milk company Chaokoh and other Thailand coconut product suppliers following an investigation by People for the Ethical Treatment of Animals (PETA) into the monkey labour at Thailand coconut farms. PETA Asia claims the Thai macaques are “snatched from the wild” and treated like “coconut picking machines.”

Other western retailers are also boycotting Thai coconut products derived from monkey labour in response to the PETA investigation. In the United Kingdom, the chains Waitrose, Ocado, Co-op and Boots announced earlier this year that they would stop selling some coconut products from Thailand that use monkey labour.

PETA says the social animals are “chained and driven insane.” A video of the alleged abuse shows monkeys in small cages, one shaking the cage to try to get out.

Many kind people choose coconut milk instead of cow’s milk because they don’t want to support cruelty to animals. But a disturbing PETA Asia investigation reveals that terrified young monkeys in Thailand are kept chained, abusively trained, and forced to climb trees to pick coconuts that are used to make coconut milk, meat, flour, oil, and other products.

In Thailand, it’s fairly common for those in rural areas to own a monkey to pick coconuts at local farms and sell the coconuts in the area. How the monkey is treated depends on the owner. The monkeys on a long leash run up a palm tree and drop the fresh coconuts to the ground for the owner to collect. Some monkeys get angry while others are relaxed and ride with their owner on a motorbike to and from a farm.

There’s even training schools for the monkeys, teaching the animals how to pick out a fresh coconut as well as how to get out of a knot just in case their leash gets tangled up in the palm tree. One monkey training school in Southern Thailand is well known by locals and many students go on school field trips to see how the monkeys are trained.