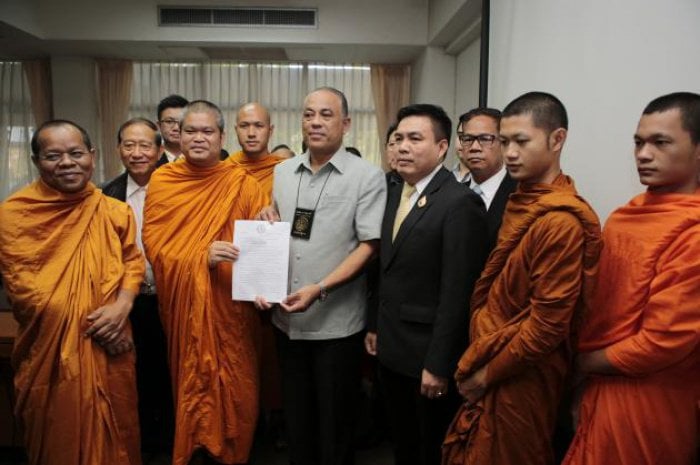 The move is seen as a strike back at the committee, which has openly questioned the Dhammakaya Temple, its abbot Phra Dhammachayo, and related figures.

PM Prayut did not directly say whether he would heed the network’s demand. When asked about the issue, he said the reform of Buddhist administration had not yet started.

NRC chairman Thienchay Kirananda said he saw no reason to abolish the committee.

The Thai Network of Buddhist Organizations submitted its petition to PM Prayut, which details its demands via a government complaint-receiving center yesterday. It also submitted a similar petition to NRC chairman Thienchay later in the day.

Phra Methi Dhammajahn, an assistant abbot of Mahathat Yuwaratrangsarit Temple and a vice rector at Mahachulalongkornra-javidyalaya University, led the network’s members in submitting the petitions.

“If this committee continues with its work, I believe monks across the country will rise up,” he said.

The petition said most of the committee’s members were religious and political extremists.

It also pointed out that while the committee had the duty to draft a new law governing monks, it did not allow monks any participation.

‘Divides will deepen in society, among monks’

On the committee are its chairman Paiboon Nititawan and several members including Chirmsak Pinthong.

“Established just a month ago, this committee has already caused so many problems,” Phra Methi Dhammajahn said. “If it stays on, divides will deepen in society as well as among Buddhist monks.”

Committee chairman Paiboon Nititawan has lately made clear that the panel will work on the guidelines on the management of temple funds, which are now exempt from tax.

The committee has also shown special attention to the Dhammakaya Temple and Phra Dhammachayo, who was once accused of embezzlement.

Phra Methi Dhammajahn insisted his network did not intend to protect any particular person or any particular temple. He also said he would welcome any investigation into his background as long as it was conducted with an honest intent.

Asked about reports that Phra Dhammachayo and the Sangha Supreme Council (SSC) were linked, Phra Methi Dhammajahn said: “I can’t comment because I am not on the council.”

His petition also demanded that Paiboon and Phra Buddha Isara, the abbot of Or Noi Temple, stop offending the council and Buddhism.

Paiboon has said lately that his committee does not agree with a resolution that the SSC passed in 2006 in favor of Phra Dhammachayo. Phra Buddha Isara, meanwhile, has called for a boycott of the SSC.

Dhammakaya Temple has decided not to comment on the uproar. Phra Sanitwong Vudhiwaso yesterday said the temple had no plan to give any interview or hold a press conference on the issue.

Deputy Prime Minister Wissanu Krea-ngam, who is now assigned to address conflict over whether Phra Dhammachayo has already been automatically defrocked over embezzlement allegations, asked for some time to work on this case.

“But the government will be able to handle it just in some aspects. One must understand that the SSC is the highest administrative body for monks under law.

“The Cabinet cannot interfere in its work. Even administrative courts do not have authority to rule on SSC resolutions,” he said.