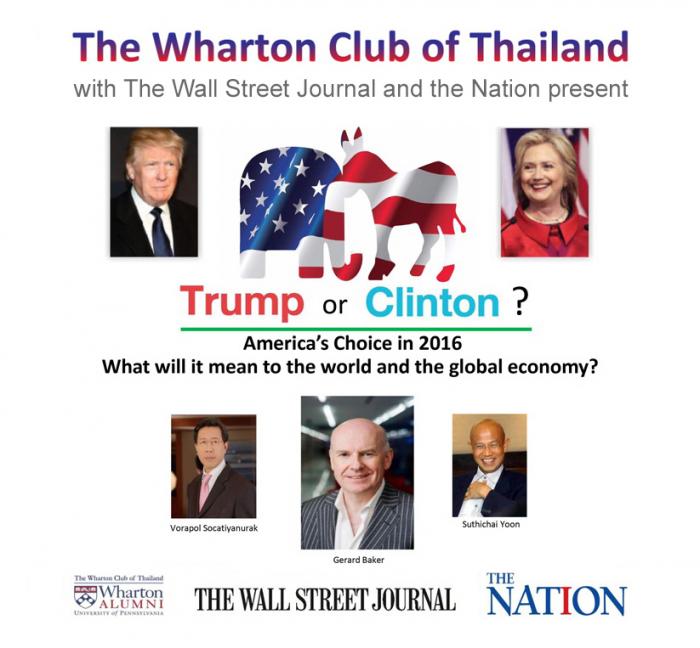 PHUKET: It’s going to be interesting. Gerard Baker, editor-in-chief of The Wall Street Journal, is flying in from New York to join The Wharton Club of Thailand and The Nation in presenting, on September 15, a ‘discussion’ of the unprecedented story lines behind the two candidates and how they are reshaping America and rubbing off on the world.

In the wake of this announcement, one story line might now have it that Trump, a graduate of the Wharton School of Business, enjoys natural support from his distinguished alma mater, and that the discussions in Bangkok on the 15th might thus be prone to tilt. But anyone buying into that notion could well be in for a surprise.

While Trump himself makes lavish use of his connection to Wharton, school officials have been steadfast in their silence about the candidate. Writing in the Huffington Post last week, Jason Fagone notes that one of the reasons for Wharton’s discomfort with Trump is that he’s “simply bad for the [school’s] brand.” (Story here.)

‘Trump or Clinton’ kicks off with a dinner at Bangkok’s Renaissance hotel at 6pm. With an introduction by Dr Voropol Socatiyanurak, president of The Wharton Club of Thailand, Mr Baker’s talk begins at 7:30. Following his presentation, he will be joined by Suthichai Yoon, founder of The Nation, for an exchange of insights under the banner ‘East Meets West’.

The event is open to the public, with admission at 1,500 baht for pre-registration or 2,000 baht at the door. Seating is limited. To register, click here and scroll down to the link. For inquiries: Phone/Line ID: 089-150 7906, or mail wharton.thailand@gmail.com.