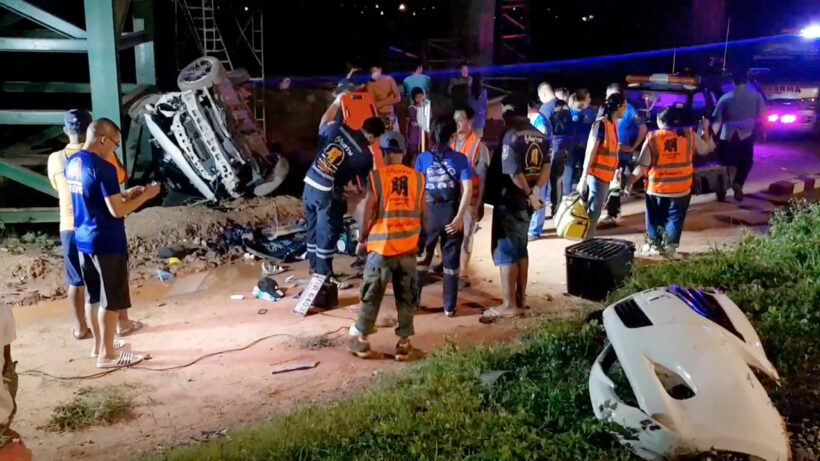 A passenger train collided with a car, killing a woman and injuring 2 others at a railway crossing in Phetchaburi’s Khao Yai district last night. Just earlier this week, a freight train smashed into a charter bus, killing 18 bus passengers and injuring another 44 at a crossing by the Khlong Kwaeng Klan railway station in the Chachoengsao province. Officials are working on how to make railway crossings safer.

At last night’s incident, police found the Toyota Vios crushed against beams supporting a bridge that was under construction. 21 year old Thitichaya Yaemkesorn was found dead inside the car. The driver, 39 year old Theerayuth Khuenta, and another passenger 33 year old Bundit Charoensap, were alive, but trapped inside the wreckage. They were extracted by rescue personnel and sent to the hospital.

The victims had just gotten off work at the Royal Plus bottled fruit juice factory in the Samut Songkhram province and were heading home when they collided with a Bangkok-Surat Thani special express train at a railway crossing. While the car was crushed, the train indicated little damage.

Police are investigating to determine the cause of the incident, but say the crossing was unguarded. In the earlier incident in the Chachoengsao province, officials say a broken crossing signal and the lack of a barrier gate to block traffic contributed to the collision.

Transport Minister Saksiam Chidchob acknowledged in a previous report that the State Railways of Thailand’s budget to install railroad crossing gates has been cut. Now officials say they plan to review and install barriers at train crossings crossing to prevent future, and potentially fatal, collisions.