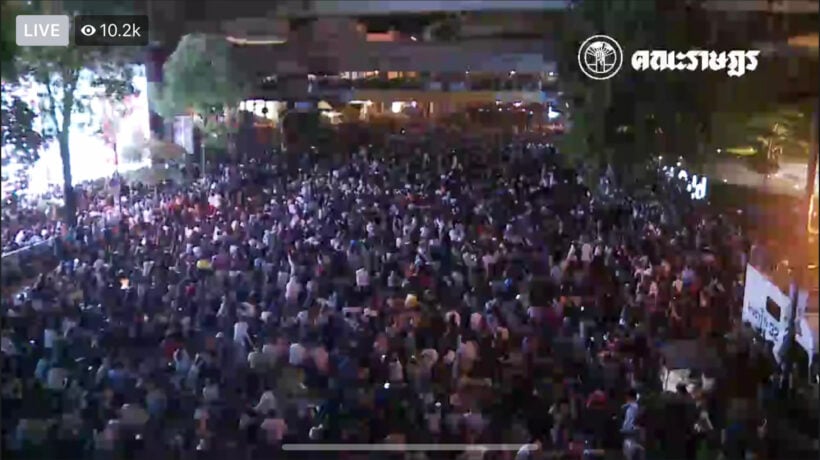 Police have closed Bangkok’s Ratchaprasong Intersection and Ratchadamri Road, just hours before the next round of anti-government protests were scheduled to begin at 5pm. Ratchadamri Road is being closed all the way to the Pratunam intersection. The closure, on a Friday afternoon, provides the city an additional traffic headache.

The police secured the area just before 2pm today.

Early yesterday morning a State of Emergency was enacted giving police special powers to arrest gatherings of more than 5 and clear “areas” at their discretion. The new edict also gives authorities the power to shut down dissenting media and arrest people making comments “that could affect national security”.

Police allowed a gathering to assemble last night after it was apparent the numbers were swelling way beyond expectations, mostly made up of school and university students, that reached 15,000+, a few more than the new limit of 5 people. Some estimates have placed the numbers upwards of 25,000. No official estimate has been released. The protesters dispersed quietly just after 10pm, vowing to return again today.

The PM, officials, police and protesters, have so far been careful to avoid violence. Apart from a few scuffles and broken barriers, peaceful assembly has been the order of the day.

Meanwhile, contractors who provided PA and sound services for last night’s gathering in Bangkok’s shopping district, have been arrested. Thai Lawyers for Human Rights report that 6 of the crew have been formerly arrested. This, while police threaten to track down and prosecute “every protester” who attended last night’s rally.

A gate leading to the skywalk overlooking the intersection of Ratchadamri and Ploenchit roads was broken down after police locked it to prevent access to the concourse area, fearful that it could have been overloaded with the throngs of protesters.

“Is this a peaceful protest?” Col. Kissana said. “I urge citizens to think about it carefully since they can’t undo their criminal records.”

The seven suspects are being detained at the regional Border Patrol Police headquarters in Pathum Thani’s Khlong Luang district, where several protest leaders who were arrested in the early hours of Thursday are also being held, the Thai Lawyers for Human Rights said.

Bangkok in “State of Emergency” for 1 month, PM warns about possible curfew