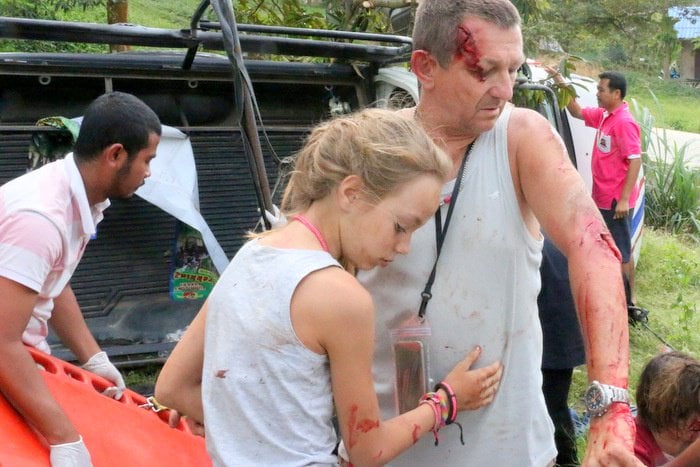 PHUKET: A Russian tourist remains in intensive care after a safari pick-up truck flipped onto its side on Koh Samui Saturday afternoon.

Koh Samui police chief Paitoon Krajajang has vowed to track down the driver, Vanich Sridon, 29, who fled the scene.

“He is wanted for reckless driving, causing injury,” he said. “We have dispatched officers to track him down.”

Mr Vanich, working for the “Funny Day Safari” tour company, was taking 11 tourists and one Myanmar national to the Tarnim Waterfall on the Khao Pom Road when the accident occurred at about 3:30pm.

“We were told that the truck was going too fast when it arrived at a sharp curve,” Col Paitoon explained. “Mr Vanich lost control of the vehicle and it flipped onto its side, throwing all 12 passengers out of the truck.”

Police identified the passengers as:

Rescue workers administered first aid at the scene, before taking all 12 to Koh Samui Hospital.

The 11 other passengers, including Ms Nanyin, suffered minor cuts and bruises.

The tour company has arranged for the 10 tourists to be transferred to a private hospital to receive treatment.

“This type of incident damages Thailand’s tourism industry,” Col Paitoon said. “We will find the driver as fast as possible. We will also pursue charges with Ms Nanyin for working as an illegal tour guide.”