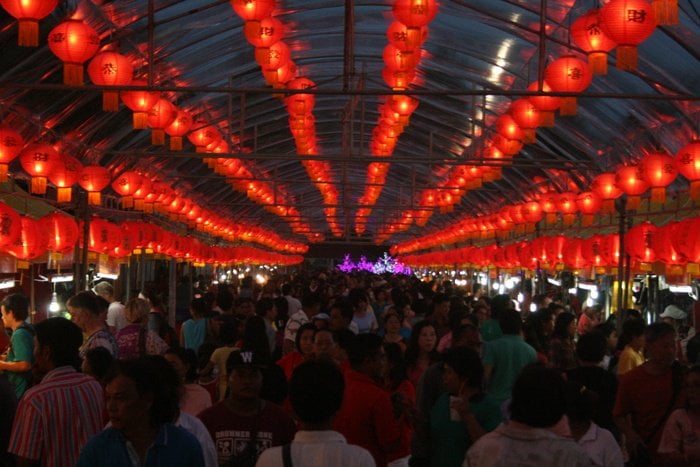 PHUKET: Chinese New Year, ringing in the “Year of the Goat”, will be celebrated in style at Sanam Chai Park in Phuket Town on February 19.

The highlights of this year’s event, kicking off at 5pm, will be a performance by a troupe of acrobats hailing from Beijing, as well as a concert by Getsunova, a famous Thai pop-rock band.

After the island’s officials get the ball rolling, the acrobats will take to the stage from 7:40pm. Following them will be Getsunova, who will perform until the event wraps up at about 10:15pm.

The park will be decked out in red, a lucky color, and will feature a 10-meter tunnel full of lights and Chinese lanterns in which festival-goers can take photos.

The area will also be packed full of food stalls – at least 60 of them – offering delicious delicacies for New Year’s revelers.

Also known in China as the Spring Festival, this is a time of renewal, when houses, including family altars, are cleaned or rearranged; distant relatives come together for festive meals; and deceased relatives and ancestors are venerated through offerings of food and flowers.

“In keeping with the traditions of Chinese New Year, we will be cleaning out our house on February 17. I urge all residents to do the same, and place anything no longer needed or wanted outside,” Phuket City Mayor Somjai Suwansapana told the Phuket Gazette.

Trash trucks from Phuket City Municipality will come around twice that day – from 8:30am to 4:30pm and 5pm to 9pm – to collect the extra trash.

For more information, call the Phuket City Municipality Office at 076-212196.