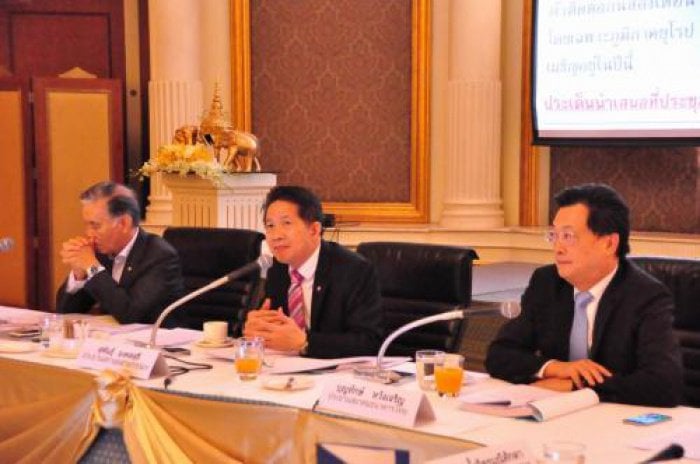 PHUKET: The Joint Standing Committee on Commerce, Industry, and Banking still believes that gross domestic product can expand by 3.5% this year, as the rebound of tourism and the expected increase in private and public spending in the second half should be able to compensate for the slump in exports.

The JSCCIB, comprising the Thai Chamber of Commerce (TCC), the Federation of Thai Industries (FTI) and Thai Bankers’ Association, represented the private sector at the meeting of the Joint Public Private Partnerships to fix the economy.

The JSCCIB yesterday lowered its export growth forecast from 3.5% to “no more than 1%”, following Bank of Thailand’s cut last month in its own forecast from 1% to 0.8%.

“The expected increase in government spending on mega-projects in the third and fourth quarters and the expected increase in private investment via the increase of investment in the special economic zones along with the approved BoI (Board of Investment) projects from last year should be able to compensate for the slowdown in merchandise exports,” said Supant Mongkolsuthree, chairman of both the JSCCIB and the FTI.

The BoI approved about 700bn baht for projects last year and companies should begin construction this quarter. This should become more apparent next quarter.

The industry that is expected to do well this year, despite the current problem within the airline industry, is tourism, with at least 28 million visitors expected this year.

The JSCCIB has urged the government to keep up with its spending since disbursements only reached 43% of budget last month.

Consumption in rural areas remained restrained because of the 50% retreat in crop prices, while bookings at the 36th Bangkok International Motor Show fell short of the 40,000 units target by almost half (around 25,000 units were booked).

This shows that domestic consumption is still constrained by the high level of household debt, he added.

Shipments to the region have edged up by 5% year on year, he said.

Mr Supant noted that exports of automobiles in the first two months were ahead year on year by 10%.