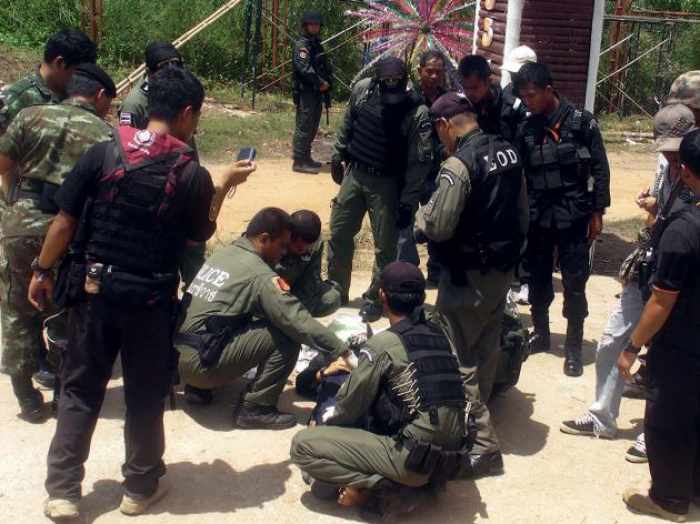 PHUKET: Insurgent violence has continued in the far South after the devastating car-bomb attack in Yala’s Betong district last Friday, two days before the end of Ramadan.

It included a roadside bomb attack in Pattani on Sunday night, the end of the Muslim holy month of fasting, and an ambush and gun battle in Narathiwat yesterday that saw the deaths of civilians, security officials and insurgents.

Fourth Army Region commander Lt-General Valit Rojanapakdee said either human or security measures were to blame for the car bomb in Betong – the area’s worst incident in seven years, which killed two and wounded dozens – and that an internal investigation was under way to find out where to place the blame.

In Pattani at 9.30pm on Sunday, a roadside bomb planted in Sai Buri district blasted a passing pickup truck carrying a number of Army paramilitary rangers, killing a 10-year-old girl and wounding five other civilians and two rangers. Explosive ordnance disposal personnel said the home-made bomb consisted of 10 kilograms of explosives in a fire-extinguisher tank detonated by two-way radio frequencies.

The rangers were providing security for a mosque holding an event to mark the end of Ramadan. Police said the four wounded civilians, including an 18-month-old baby, sustained the blasts when the bomb was planted near a residential area.

In Narathiwat at 11.15am yesterday, a gunfight in Rusoh district saw three suspected insurgents killed, two of whom were allegedly senior members, and two security officials.

A manhunt was under way at press time to trace the remaining insurgents who took part in an ambush that led to the gunfight. Two dead insurgents were identified as suspected core operative Abdulloh Yunuh and suspected bomb-maker Safwal Saleh. The other man was identified as Abdul-rohpha Salehru.

A local Army unit commander, Sub-Lieutenant Nakharin Sukhumraj, said an ambush targeting a team of policemen began with a gunfight. A team of Army paramilitary rangers led by Sgt-Major Chainarong Wongsarat, who sustained injuries and died later at hospital, arrived at the scene, not far from a train station, to relieve the policemen.

A slain policeman was identified as Pol Lance-Corporal Assaming Yousoh.

Probing further into the Betong car bomb, police intelligence sources identified insurgents most likely responsible – a group of men who hijacked the vehicle led jointly by Makorseng Jehma and Aba Jeh Ali – and those who planned and carried out the attack. Alleged group leaders were Maruwan Saleh, based in Krong Pinang district and Adae Hayi Samoh based in Bannang Sata district.