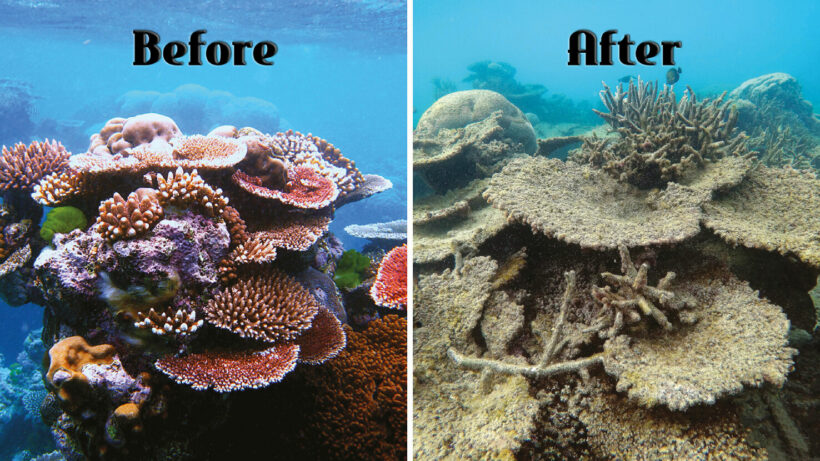 PHOTO: Coral reef are dying causing Thai parks to ban the sunscreen that is damaging them. (via Financial Times)

Fair-skinned travellers beware – visiting Thailand’s beautiful natural parks just got a bit harder and may leave you literally seeing red. Get ready for sunburn, as a new law announced last night in the Royal Gazette has banned the use of some sunscreens that contain certain chemicals (below) within the grounds of Thailand’s national parks.

The rule was enacted in a bid to protect the beautiful coral reefs that Thailand’s marine tourism is famous for. Studies have shown that the chemicals used in some sunscreen have been linked to damage to coral. The intention of the ban of any sunscreen that contains these chemicals (below) is to prevent swimmers in marine parks from inadvertently damaging the coral reefs.

The chemicals that are found in some sunscreens that can damage coral include Butylparaben, Methylbenzyl, Octinoxate, and Oxybenzone, and all sunscreens containing these chemicals are now banned within the borders of all national parks in Thailand, according to the Department of National Parks.

Violators of this new rule can be penalised with fines of up to 100,000 baht, around US $3000, a harsh punishment imposed to dissuade travellers and tourists from disregarding the seemingly innocuous rule.

While many think of it as a sort of rock formation, coral is a living and growing organism. But it grows at a maximum rate of 2 centimetres per year and is often as slow as 0.3 centimetres a year. That means the coral formations that snorkelers and scuba divers marvel at today were formed over tens of thousands and sometimes hundreds of thousands of years. Once a coral formation is killed off by things like harmful sunscreen chemicals, along with climate change and pollution, it cannot grow back.

Scientists estimate that fully half the coral in the world has been killed in the last 30 years and, without action, 90% will be gone within the next century. At the slow rate of growth, the beauty of Thailand’s coral reefs wouldn’t be seen again for a few hundred generations if conservation isn’t proactive, hence the banning of sunscreen in national parks.

KWOG
1 minute ago, Bangkok_Gary said: To all those people dumping on Thailand, Hawaii also banned such sunscreens. I think that's the report I read, maybe last week.  Much ado about nothing. The ones they banned probably make up 1 percent of…
sputnik
5 hours ago, BookShe said: In case you wonder.... This is a private land supposed to be a water park in Samui. Now half the island is dumping their garbage here illegally. (sun cream too) The best part is when…
BookShe
4 minutes ago, sputnik said: that all happens when unmonitored mass tourism happens....if only the thais dump their shit in the oceans ( before plastificatinn of the world and before  the industrialisation of china  ) it does not create such…
Rocco
Too bad this government isn’t as concerned about its citizens as it is about coral
Oliverroysparks
I Told them This 21 Yrs ago on my first Visit to a Marine National Park How Long to do anything about it SNAILS Work Faster than Thai Beurocratic  Rubbish