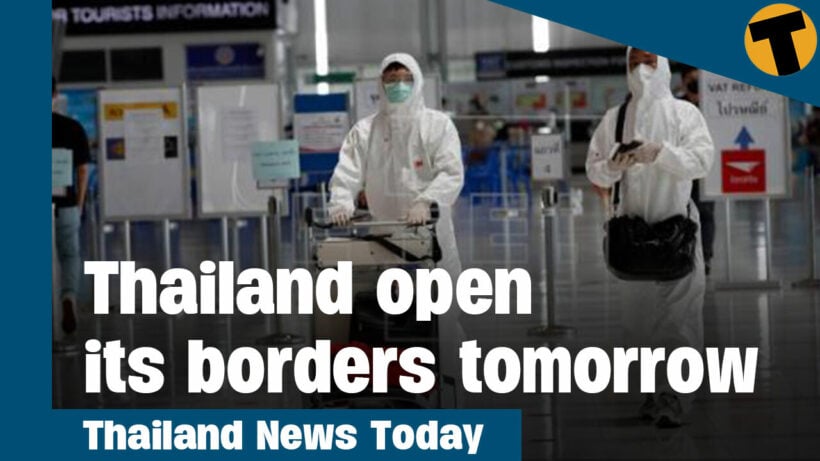 You’re watching Thailand News Today, bringing you the top headlines in Thailand and beyond. And in our first story,
Thailand’s Test & Go entry scheme returns tomorrow after a short hiatus. This time, it is open to travelers from every country in the world.

However, travelers will now have to take not 1, not 2, but 3 PCR tests in order to participate in the scheme. The first test needs to be taken 72 hours pre-departure from the home country, while the second and third are done on arrival and again on day 5.

As always, those who need a visa will need to apply in advance at their nearest Thai embassy or consulate. All travellers must register for a Thailand Pass, which requires proof of paid bookings at an AQ or SHA Extra+ hotel for days 1 and 5, including pre-paid PCR tests on both days. Applicants must also upload proof of being fully vaccinated with an acceptable vaccine at least 14 days before entry. Accepted vaccines include AstraZeneca, Pfizer, Moderna,
Sinovac, Sinopharm, Johnson & Johnson,
Sputnik,and Covaxin).

Health insurance cover of at least US$50,000 is also required. People who have recovered from Covid-19 can enter provided they have a certificate of recovery and proof of 1 dose of a Covid-19 vaccine.

In addition to Test & Go, the Sandbox scheme will be expanded to the following destinations starting from tomorrow

A Thailand Pass is also required for the Sandbox, with the same criteria as Test & Go. However, the Sandbox has an additional stipulation that requires visitors to spend their first 7 nights in the same sandbox zone, before traveling elsewhere in the kingdom. They too will be subject to PCR testing on arrival and again on days 5 or 6.

The Test & Go and the Sandbox are currently not open to unvaccinated travelers or those vaccinated with unrecognized vaccines. These visitors will be required to spend 7 days in an alternative quarantine facility.

Pattaya City officials met with more than 30 local business owners on Saturday to discuss how to reopen the famous Pattaya “Walking Street” ahead of a planned US troops visit weeks ahead. Around 2,000 soldiers are expected to visit this month for the Cobra Gold military exercise and it seems like Walking Street is where they plan on staging their own unofficial invasion.

The discussion between Bang Lamung district, the Pattaya Walking Street Business Association and Pattaya City Police comes just as Chon Buri prepares to welcome an anticipated influx of visitors under the Test & Go and Sandbox schemes.

The military drills are scheduled from February 20 to March 5 for field training and humanitarian exercises. However, it is unknown whether they will be given leave or liberty during their stay.

However, the Pattaya City Police Chief Police also asked entertainment venues such as bars, pubs, nightclubs, and karaoke lounges to remain closed in accordance with national standards. However, he emphasized that they may apply to temporarily opening as “restaurants.”

All attendees at the meeting agreed to ease restrictions in the future, including the legal reopening of nightlife, prolonging closing hours, permitting “extras” like pool and karaoke, and reducing the existing severe daily ATK testing regulations if the Covid-19 situation is improved in the area.

Following the leaking of thousands of liters of crude oil into the waters around the eastern province of Rayong, the clean-up of แม่รำพึง beach has been completed.

The Natural Resources and Environment Minister has confirmed that all the oil washed ontoแม่รำพึง has been removed. He has now placed all teams on standby in the event of the oil washing ashore at อ่าวพร้าว.

The beach is around 500 metres wide and the minister says the oil must be stopped from reaching the area. The Royal Thai Navy has spotted an oil slick about 5 kilometres from Koh Samet but officials are hopeful it will not pose a threat to the beach.

Meanwhile, the Geo-informatics and Space Technology Development Agency will have satellite images of the oil slicks in the seas off Rayong transmitted to its ground station to ensure all spills are taken care of.

Activists demanding justice for evicted Karenni forest-dwellers have rallied in Bangkok, calling on the government to support the ethnic communities ousted from แก่งกระจาน National Park.

A procession of vehicles through the capital was led by P-move and the Save บางกลอย group.

Protesters say the people have been living in the Kaeng Krachan forest well before it was officially designated a national park in 1981. In 2010, 57 Karenni families were moved out of the park, when the Thai government applied for UNESCO heritage status.

At the time of their eviction, each family was promised 7 rai of fertile farmland. However, the families say the land they were given was not fertile and no crops could survive on it. As a consequence, they moved back into the forest in early 2021 and were promptly evicted by authorities.

At yesterday’s protest, activists called on the Ministry of Natural Resources and Environment to provide acceptable land for the people to farm and to stop legal action against 30 villagers from บางกลอย and 10 activists from the Save Bang Kloy group.

Activists are also demanding the ministry form a new committee to investigate the villagers’ land disputes. They also want the National Park Act amended, claiming it encroaches on the rights of forest dwellers in its current form. Furthermore, they are calling on the government to introduce a new “people’s bill” that recognises the rights and livelihoods of ethnic minorities.

If you’ve been to Phuket, you’ve probably paid way too much for a taxi. Now, one Thai traveler claims a Phuket taxi driver ripped him off by charging a fare of 600 baht and even got the police involved to sort out the situation.

The Thai traveler has a large following on social media, so he recorded confrontations with the police and taxi driver, posting the videos on Facebook and drawing criticism on the island’s notoriously high taxi fares. Many comments say they’ve had similar experiences.

In the video, the man who appears to be the driver yells that the fare is 600 baht. He added that he wasn’t scared of the police, daring the customers to call and saying he and the police are friends. After talking with the police, officers called the driver to the station. Reports say that the driver insisted that 600 baht was the standard price and that no one forced the traveler to use his service.

The driver claimed that since it was late at night, and the trip was quite far (although reports don’t mention how far), the price at 600 baht was reasonable, adding that he would increase the price with more passengers.

In regional news…
International flights in the Southeast Asia region continue to resume, with low-cost carriers expanding their routes as countries re-open.

The Singapore Airlines subsidiary, Scoot, is resuming the Singapore – Ho Chi Minh route, with 4 round-trip flights a week while a twice-weekly service connecting Singapore and Hanoi is planned from February 22.

Under the current regulations, tourists to Vietnam are limited to government-approved tours, and need to meet other requirements such as PCR testing and quarantine.

From February 23, Scoot is also launching 2 flights a week between Singapore and Miri, in Sarawak state, in Malaysian Borneo. Miri will be the second Sarawak city served by the carrier, in addition to its flights to the state capital of Kuching. The news follows Scoot’s announcement last week that it is resuming flights between Singapore and Australia’s Gold Coast.