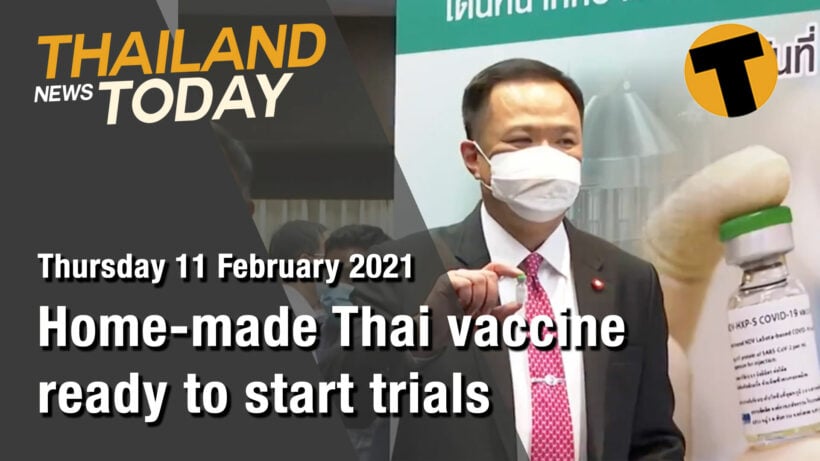 Thailand’s Health Minister, Anutin, is now claiming that the first stage of human trials of a locally-produced vaccine brew will get underway next month. The local Thai vaccine is a joint collaboration between the Government Pharmaceutical Organisation and the Faculty of Tropical Medicine of Mahidol University. It’s understood the vaccine has performed satisfactorily in animal testing, showing an ability to stimulate immunity.

Human trials will take place in 3 stages. Phase 1 will involve 210 volunteers and will be conducted over 2 months, to determine the ideal dosage. Thai volunteers in next month’s trials will be either given the vaccine or a placebo. Those who show positive results will also take part in phase 2 trials.

In phase 2, researchers will trial 2 of the most effective dosages on 250 participants. Phase 3 should start around the end of 2021.

Once the vaccine has successfully completed all 3 phases, the vaccine manufacturers will seek approval from the local FDA and, and then go into production locally.

The Faculty of Tropical Medicine has more than 30 years’ experience in testing various vaccines, including those used against bird flu, dengue fever, cervical cancer, HIV, and the seasonal flu.

The normally busy tourist hotspots of Pattaya and Phuket are aiming to re-boot domestic tourism, now that the latest Covid-19 surge is waning. Both locations had become completely dependent on domestic tourists following last April’s border closures, but then had to contend with a second blow when Covid-19 clusters broke out in December, principally around Samut Sakhon and Rayong.

Now Pattaya has launched a campaign known as “Check in Chon Buri Free 500”. Guests who check into a hotel anywhere in the eastern province of Chon Buri will be rewarded with a 100 baht coupon, which can be redeemed at around 130 restaurants, spas, and tourist attractions. On the first night, 5 coupons will be handed out, up to maximum of 10 coupons for 2 nights. The promotion is only available for people from outside of Chon Buri.

Meanwhile, Phuket has also launched an online campaign called “Have You Ever”. Phuket’s provincial administration organisation is calling on Thais to share the campaign on Facebook, to encourage people to visit the island.

Phuket’s Governor says the damage done to the local tourism sector by the border closures and lockdowns means it must now fight back to rebuild its economy.

Myanmar’s military commander has established a line of communication with Thailand’s PM Prayut Chan-o-cha detailing why a coup was staged next door and why they found it necessary seize power after a democratic election last November.

Commander-in-Chief Min Aung Hlaing explained why the Tatmadaw (that’s the Burmese Army) had to stage a coup and asked for help to support democracy. He alleged that fraud took place in the November 8 democratic election – an election where the army-backed parties only gained 7% of the total vote. The country’s electoral commission had already dismissed the army’s complaints of fraud just days before the coup on February 1. PM Prayut responded by saying he always supports the democracy of Myanmar, but won’t interfere with its internal affairs.

“At the very least, we are supportive of the democratic process in Myanmar, while what we also have to do is maintain relations (with Myanmar) as well as possible because that will benefit all Thai people and border trade (with the neighbouring country). Thailand supports the democratic process. The rest is up to him to see how to proceed.”

Prayut says the issue is sensitive but warned that he was not supportive of anti-Myanmar coup protests inside Thailand. Hundreds of Burmese people recently gathered outside the Myanmar Embassy in Bangkok, whilst in Myanmar, thousands of demonstrators took to the main city of Yangon, including hundreds of government workers and a group of policemen from the eastern Kayah state. The large protests have prompted the military to issue a night curfew and restrictions on gatherings in the state’s larger cities.

Pro-democracy activists have pledged to continue and increase their protest action this year, aiming for 2 million protesters at each event. The pledge came a day after 4 activists were denied bail by the Criminal Court in Bangkok. Around 1,000 protesters gathered at the Pathumwan intersection in the capital calling for the release of their 4 colleagues… the ring leaders of last year’s anti-government protest movement.

They also reiterated the 3 key demands they’ve been pushing for since anti-government protests began in July 2020: the resignation of the PM, Prayut Chan-o-cha, a re-write of the Constitution, and reform of the Thai Monarchy.

Protesters booed police officers and beat pots and pans, a nod to a belief that banging pots will dispel evil spirits. One activist told the media that the pots were empty to reflect the fact that many people are now so poor they can’t afford rice.

Yesterday’s protest started at 4pm, with participants marching to Pathumwan police station at around 7.30pm to demand the release of the 4 detained activists. Police arrested 10 people, including 2 minors who were released on bail of 5,000 baht each. Protesters dispersed peacefully around 9pm.

Thai authorities say they will oppose Vietnam’s plan to impose a 34% anti-dumping tax on sugar imports from Thailand. Vietnamese authorities claim that Thai exporters are gaining an advantage over their Vietnamese competitors because of lower costs.

The Vietnamese Industry and Trade Ministry launched a probe into the issue and, according to its preliminary findings, found the accusations have grounds.

The investigation, conducted since September last year, found dumped sugar from Thailand sharply increased to 1.3 million tonnes in 2020, up 330% from 2019.

The schedule for the import duty has not been decided. The ministry expects to conclude its investigation in the second quarter this year.