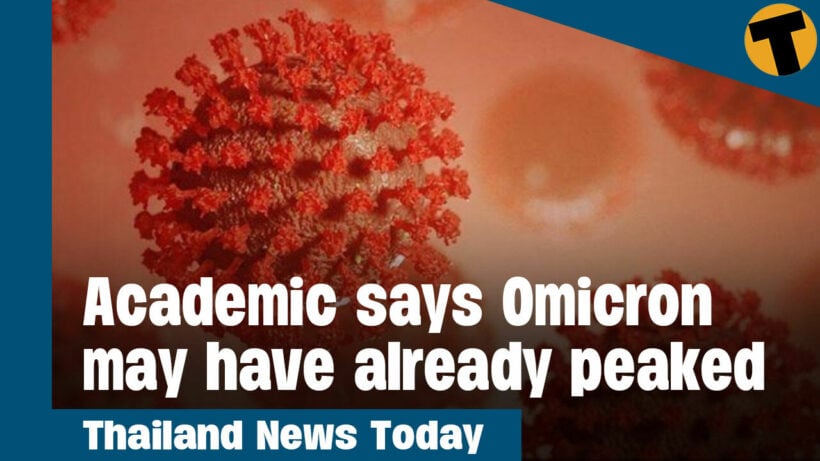 Last week, as some Thai doctors were having fun predicting a ‘doomsday’ scenario with up to 100,000 new Covid infections per day post-Songkran, one academic just had to kill the party by citing..whoops… “real data”, that indicates Omicron may have already peaked in Thailand.

In a Facebook post over the weekend, a science lecturer from Chulalongkorn University Jessada referred to Public Health Ministry data that shows a surge in Omicron cases in February, with infections peaking in early March.
Jessada says case numbers subsequently began to rise again at the end of March, due to the arrival of the new BA.2 sub-variant. However, the infection rate has continued to fall throughout April.

“Hence, he said we can confirm that the number of Covid cases in Thailand is currently on a downward trajectory, in line with the global situation, which saw new cases peak 2 months ago before falling.”

Since the latest variant surge peaked on April 1 with 28,376 reported daily infections, the daily reports have dropped a lot. Today the reported infections were 16,994. But the rate of Covid-related deaths is still trending upward, today it was reported that there were 124 dying of Covid-related symptoms over the past 24 hours.

According to a Nation Thailand report, Jessada points out that the fall in cases has been slower in Thailand than in other parts of the world, due to both Omicron BA.1 and BA.2 striking the kingdom simultaneously.

In addition, he acknowledges that a rise in new infections after the Songkran holiday is likely, but believes we’re unlikely to see the numbers we saw at the beginning of the Omicron outbreak. He adds that the number of Covid patients with lung problems and in need of respirators remains high, in line with current case numbers.

In an attempt to prevent a surge in infections following the recent Songkran holiday, Thailand’s health ministry is advising businesses to have employees work from home for 7 days.

Chakraratfrom the Department of Disease Control says “Once the Songkran festival is over, the number of cases may increase by 20 – 30%.”
He says businesses and organisations, including state agencies, should adopt a policy of working from home for between 5 and 7 days. Employees are also being encouraged to self-screen often with antigen test kits.

Chakrarat is also calling on people in high-risk groups to ensure they get their vaccine boosters. These include people with underlying health conditions, those over the age of 60, and pregnant women. He adds that data shows only 37% of people in those groups have received a booster dose, well below the government’s 60% target.

In related news, the CCSA will meet this week to review the country’s Covid situation following the Songkran holiday. Supot Malaniyom says the government’s Covid-19 task force will decide the next steps based on case numbers. The goal remains to declare Covid endemic by July. Among items to be discussed is the reopening of schools for the new term, and a possible review of travel restrictions.

A double bomb attack in Pattani province in southern Thailand on Friday killed a fisherman and injured three explosive ordnance disposal officers, leaving two of them severely injured and in desperate need of blood donations. Songklanagarind Hospital invites the public to donate blood of any type at the hospital urgently.

Lieutenant Colonel Thanongsak Jesa, an EOD officer from Pattani province, has suffered injuries to his face, left hand, and both legs. Lieutenant Colonel Kasem Buathet, another EOD officer from Pattani, suffered injuries to his face and right leg and remains in a coma after losing significant amounts of blood. The men require large amounts of blood donations to recover.

The bombings broke the 40-day ceasefire agreed by the Thai government and rebel group Barisan Nasional Melayu Patani in recent peace talks held in Malaysia. A militant group is known as G5, part of the Patani United Liberation Organisation, said that they were responsible for the attack. The group was not part of the peace talks in which the warring sides of the ongoing conflict agreed to a 40-day ceasefire in the southern border provinces to cover the holy month of Ramadan and the Songkran holidays.

More than 7,300 people have been killed in the conflict between the Thai government and rebel groups in Narathiwat, Yala, Pattani, and parts of Songkhla since violence resurfaced in the area in 2004.
If you are eligible and able to donate blood in Songkhla province, please contact 074-451575.

After a famous lawyer shared a video of a hotel that was operating a bar in Phuket that was open beyond the cutoff time and got it shut down, the bar staff staged a protest on Bangla Walking Street.

The hotel had been operating as a de facto nightlife venue, assumedly away from the hustle-bustle and attention of Bangla Road, for months.
Angry and out of work, the staff marched on Bangla Walking Street to protest the whistleblower and subsequent crackdown. On Saturday, the celebrity lawyer, Sittha Beerbangkird, shared the video of the bar on his Facebook page. According to Sittha, Phuket residents had complained to him that the bar at Patong Bay Hill Resort often opened over time. He said they had sought his help to expose the bar on social media because local authorities had done nothing about it.

The lawyer then visited the bar at 2 am and recorded a video featuring crowds of partying tourists.
During the pandemic, which is still technically a national emergency, Thailand allows bars in the yellow and blue zone that turn into restaurants to serve alcohol until 11 pm after that, alcohol sales are illegal. However, this bar was caught fully operating as a bar well past the cutoff time.

After his video went viral, the bar at Patong Bay Hill Resort was ordered to close temporarily. In response, more than 50 bar staff, who have lost their jobs, went to Bangla Walking Street to protest at 11 pm on Sunday.

They displayed various signs and banners complaining to the lawyer, with messages like…
“We are hungry, and we’re doing this for food, unlike someone who just wants a reputation on social media”; “We do not welcome anyone who wants a spotlight”; “Can you pay my debt?”; “Mind your own business!”

The protesters said Patong was a tourist destination with no rubber plantations or palm plantations, so they had to do what they did to earn a living. They added that no one had taken care of them since the pandemic hit, and residents had to survive on their own.

Myanmar’s military government granted amnesty to over 1,600 prisoners, including 42 foreigners, during the country’s New Year’s holiday from April 13-16. The punchline is that 1,600 is actually a tiny amount.

The figure is small compared to the 23,000 prisoners released during the holiday last year. Despite Myanmar’s ruling general’s promise to restore peace in the country this year, no political detainees were released.

State Secretary Lieutenant General Aung Lin Dwe said he did it to quote “bring joy for the people” Hmm where have I heard that slogan before?
Since the military stole power over Myanmar by a coup in February last year – ousting the elected government of Aung San Suu Kyi – at least 13,000 people have been arrested and over 1,700 people have been killed by the military in Myanmar, that’s according to the Assistance Association of Political Prisoners (AAPP).

Myanmar “pardons” prisoners of their crimes annually to mark the Buddhist New Year. However, a significantly lower number of prisoners were released this year. Most of the prisoners released were drug offenders and petty criminals.

Like Thailand, Myanmar’s New Year celebrations usually feature water fights and street parties. However, this year the streets were quiet in protest of the military. Opponents of military rule called for a boycott of government-supported activities this year which was supported nationwide.