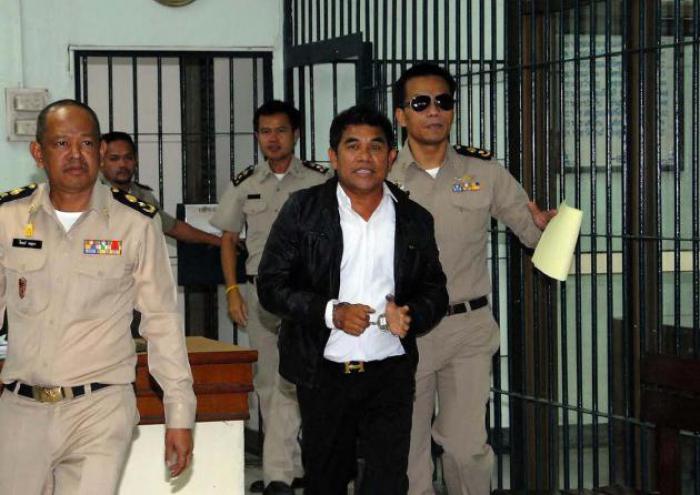 PHUKET: The Appeals Court yesterday upheld a two-year lese majeste prison sentence against Jeng Dokjik for his speech during a red-shirt rally on March 29, 2010.

The court said the sentence would not be suspended for Yossawaris Chuklom, alias Jeng Dokchik, a former adviser to a minister and a leading member of the United Front for Democracy against Dictatorship (UDD).

The court agreed with the lower court’s ruling on January 17, 2013, that part of his speech made from the UDD rally stage violated Section 112 of the Criminal Code and Articles 2, 8 and 12 of the Constitution.

After the court’s verdict, Yossawaris was remanded to Bangkok Special Prison pending the Supreme Court’s consideration of his request for temporary release, expected early next week.

PHUKET: Lawmakers in the United States have urged the administration of President Barack Obama to punish Thailand and other countries in Southeast Asia for not doing enough to fight human trafficking, accusing Thai officials of selling Rohingya Muslims from Myanmar to traffickers.

Republican Representative Chris Smith called on the administration to downgrade Thailand and Malaysia unless the authorities in these countries showed progress on the protection of the Rohingya refugees.

Thailand and Malaysia are transit places for Rohingya migrants who flee from harsh persecution in Myanmar, he told a House of Representatives subcommittee hearing on tier rankings and the State Department’s annual Trafficking in Persons (TIP) report on Tuesday.

“According to reports put out by Reuters, Thai authorities are selling Rohingya to human traffickers, where they are held in ‘tropical gulags’ until relatives pay ransom,” Smith said.

Those who do not pay are sold into sex slavery or hard labour and many die from abuse or disease, he said.

Thai authorities did little to prevent this situation, he said, adding that the Rohingya migrants are always sent to Malaysia, where they are also exploited as workers.

Myanmar is the source of the refugee problem because of its policies of discrimination, harsh persecution and violence, which force Rohingya to leave the country as boat people, he said.

Tier 3 countries are open to sanction by the US government. A US law also includes a watch list, in which countries on Tier 2 for two years are downgraded to Tier 3 unless they receive presidential waivers, available for two additional years.

Mark Lagon, a professor of international affairs at Georgetown University, said in his testimony on Tuesday that Thailand was on the cusp of an automatic downgrade to Tier 3.

“Public unrest and shaky rule of law in the last year are no pretext for not telling it like it is in the TIP 2014 report,” he said.

Tarit submitted 217 files comprising 57,514 pages of documents as evidence against PDRC chief Suthep Thaugsuban and the other 57.

The other charges are conspiring with more than 10 people to stage armed protests, resisting police orders, encouraging work stoppages to coerce the government, blocking election officials at polling stations from carrying out their duty, and preventing and disrupting the work of the Election Commission.

The evidence was given to Special Case Office director-general Nanthasak Poonsuk.

The DSI will submit evidence against seven other PDRC leaders including Democrats Ongard Klampaiboon and Boonyod Sukthinthai, who face the same charges, next week.

Nanthasak said a team of seven prosecutor would work together to decide on the cases.

The indictment will be classified into types of wrongdoing and not one decision against all 58 suspects.

Nanthasak said prosecutors would try to reach a decision before the detention deadline. Sonthiyan is scheduled to be released on May 10.

PHUKET: The government and the ruling Pheu Thai Party yesterday gave the cold shoulder to an offer from Democrat Party leader Abhisit Vejjajiva that would see him take a political break if his proposal to get the country out of the political crisis is accepted by all the parties involved.

Prime Minister Yingluck Shinawatra said she was looking forward to seeing details of Abhisit’s proposal, which is supposed to be unveiled tomorrow.

“I hope that Abhisit and the Democrat Party will not set any conditions,” she said. “I believe that society is waiting patiently for the problems to be over. We are trying to find common ground, as Abhisit has said, so that we can move forward.”

Abhisit, Yingluck’s predecessor as prime minister, said yesterday that he would by tomorrow unveil his proposal, the result of his recent meetings with key political players.

“If all the parties involved accept my proposal, I will not contest the next election and will not assume any political position,” he said. “This is to make sure that I will not derive any benefits if my proposal is implemented.

“I will just be an ordinary citizen who supports a reform that will be carried out in line with my proposal.”

Abhisit served as the opposition leader before the dissolution of the House of Representatives in December.

Pheu Thai secretary-general Phumtham Vechayachai said he was more interested in Abhisit’s proposal than whether he would or would not contest the next election.

“It’s no problem if Abhisit runs in the election or not,” Phumtham said. “It’s more important whether Abhisit’s proposal will benefit the country.

“If his proposal really offers a way out for the country, it’s no problem if Abhisit contests [the election] or does not.”