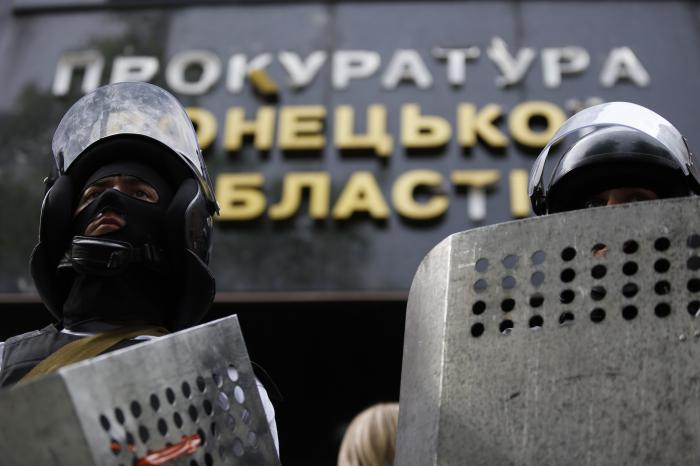 To shouts of “Fascists”, a refrain Moscow uses to describe Ukraine’s new government, hundreds of people pelted the police with paving stones and then cornered some, dragging them to the ground and beating them. The police soon surrendered.

Donetsk, a city of about 1 million people in Ukraine’s industrial east, is at the centre of an armed uprising across the steel and coal belt by mainly Russian-speakers threatening to secede from Ukraine.

The violence, in a city already largely under the control of separatists, underscored the shifting security situation across swathes of eastern Ukraine where suspicion of Kiev runs deep.

“The prosecutor’s office was issuing criminal orders from Kiev against its own people, charging them with separatism and other fake crimes,” said one protester, a 43-year-old man from Donetsk who gave his name as Igor.

After trapping them against the front of the building, protesters let some security officers inside the building to escape. Some were badly wounded.

Pro-Russian separatists in the city have declared a “People’s Republic of Donetsk” and say they will hold a referendum on secession on May 11.

Police in the east have largely given up without a fight when confronted with protesters armed with clubs and with often well-organised gunmen in masks and military fatigues. But officers often continue to work, in tacit cooperation with separatist leaders who want to maintain order.