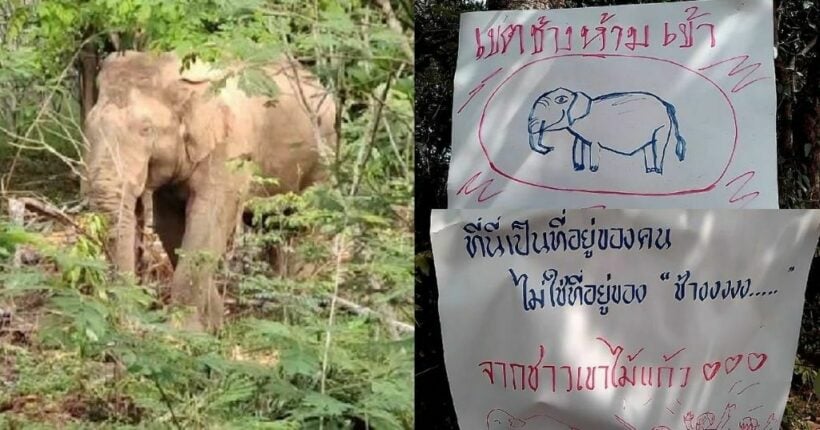 After attempts to lure a hot-tempered elephant back into a wildlife sanctuary failed, locals in the village where the elephant has wreaked havoc, destroying plantations and killing an elderly woman, have put up a sign – even though the elephant cannot read – telling the animal to go away.

Park officials in eastern province Prachin Buri were ordered to detain the 25 year old elephant, named “Sidor Noke,” and bring it back to the Khao Ang Rue Nai Wildlife Sanctuary. The aggressive elephant has been roaming around the Khao Mai Kaew sub-district for the past three months, raiding plantations and killing a 73 year old woman as she was picking vegetables and fruit.

Officers tried to lure the elephant back into the forest, but the animal returned to the community and plantations in search of food. Other elephants from the same herd also started wandering around the area. Even though the elephant cannot read, the residents decided to put up a sign to tell the elephant to go away.

The sign said… “Dear Sidor Noke, all of the residents are suffering from your invasion. You destroyed food and killed our friend. Please go away. This is the human area, not for elephants… from Khao Mai Kaew residents.”

The authorities are now monitoring the situation and are working on bringing all of the elephants back to the forest. Reports say elephants could be roaming the plantations due to a lack of food and water in the forests during a summer drought.

DoUKnowWhoIAm
1 hour ago, Thaiger said: even though the elephant cannot read Sure? 🤔
HiuMak
An educated Elephant.