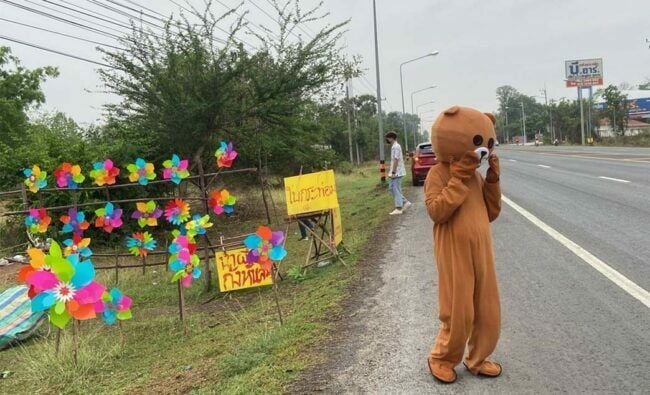 Now that kratom is legal in Thailand, one woman in the Isaan province Buriram is dressing up in a bear costume and standing on the side of the road to attract business. Apparently, it has worked and her roadside sales of kratom leaves have shot up to over 1,000 baht per day.

40 year old Monradee Mordham from Udon Thani has had a change in career after losing her factory job due to the Covid-19 pandemic. Monradee has two children to support and was quickly forced to find an alternative source of income. Monradee chose to sell kratom, a Thai herb that was decriminalised last year, on the roadside in Buriram. However, she was only making 200 baht to 300 baht per day at first. Monradee tried changing the location of her kratom and windmill stall to spark more interest, to no avail. Just when things were looking downhill, Monradee found her bear-ings.

Monradee invested 700 baht in a bear costume and has been making over 1,000 baht per day in kratom sales ever since. Monradee said lots of parents stop by and buy from her stall because they want their children to take a picture with the kratom bear.

Kratom is a plant known for its opioid and stimulant-like effects. Kratom has been used in all parts of Thailand for a long time, often in traditional medicine or by farmers who chew the plant’s leaves to sustain their energy levels while working in the fields. Kratom was previously listed as a Category 5 narcotic under Thai law, but was reclassified last year as a herb that can be legally grown and sold under the amended Narcotics Act. Since kratom’s decriminalisation, 8,000 kratom-related crimes have been cleared of charges.

With temperatures reaching up to 37 degrees Celsius in Buriram in the summer months, Monradee really is bear-ing the heat in that mascot costume.

DoUKnowWhoIAm
4 minutes ago, Rookiescot said: Where would one be likely to find some of these Kratom plants? Asking for a friend. I bought some in Ramkamhaeng, chewed it, the only effect I got was bitter taste in my mouth. Perhaps…

KaptainRob
6 minutes ago, Rookiescot said: Where would one be likely to find some of these Kratom plants? Asking for a friend. Buy online, they're widely available.

PapayaBokBok
13 hours ago, DoUKnowWhoIAm said: Yes, it's bear market times now. I wonder how she will appear in a bull costume when that time comes🤔 could dress as a buffalo and raise funds for an isaan family from a grandpa…
HolyCowCm
12 hours ago, Rookiescot said: Where would one be likely to find some of these Kratom plants? Asking for a friend. Many places in CM. You want the plant or leaves?

AlexPTY
so hard... i am wondering how drug dealers were making so much money?