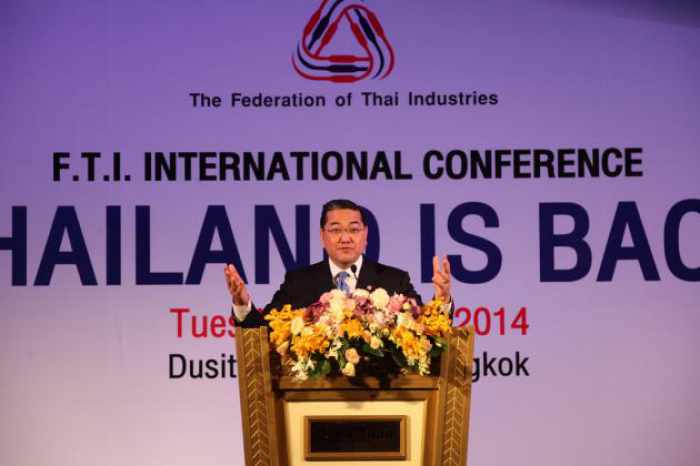 PHUKET: Thailand is back to work and business after months of political impasse, but there are challenges to be addressed to ensure sustainable growth, an international business conference heard yesterday.

Surakiart said in his keynote address that it had to be recognised that the actions of the military administration over the past two months had brought a respite and had received broad popular support throughout the country. “The nation has pulled itself back from the brink.”

He was speaking at an international conference on “Thailand Is back”, co-hosted by the Federation of Thai Industries (FTI) and The Nation at Dusit Thani Hotel in Bangkok. Surakiart was speaking on the subject of “Thailand’s Reforms”.

He said that in principle, he was not an advocate of military intervention. But it had to be conceded that the actions taken by the military two months ago most likely avoided hundreds of deaths that could have resulted from impending violent clashes among opposing groups of demonstrators.

He said the increasingly strident confrontations between the two unyielding forces of the political divide had threatened to tear the nation apart.

Surakiart, who is also chairman of the Asian Peace and Reconciliation Council, said that after the protracted political conflicts of the eight months before May 22, “Thailand is now back to business with public and private sectors joining hands to move the country forward through economic restructuring and a major process of national reform, in order to return the country back to a state of well-being.”

Already, without the burden of limited authority of the previous caretaker government, and the legal entanglements created by parties to the conflict in the past year, the interim administration has been able to tackle pressing issues.

Surakiart cited the payment of debts amounting to more than Bt90 billion owed to farmers for more than eight months under the rice-pledging scheme, and approval for long-awaited projects under promotional privileges of the Board of Investment worth Bt200 billion, with a further approximately Bt400 billion worth of projects in the pipeline.

There are still a number of tasks that have to be performed to ensure sustainability, he added. Among these, the public and private sectors need to devise strategies and action plans to handle the decline in tourists and the sluggish export growth. Relatively weak small and medium-sized enterprises need capital facilities and other assistance to enable them to benefit fully from the upcoming Asean Economic Community.

He noted that while the economic road map has been spelled out and is in the process of implementation, the political road map was equally important, as political stability is a necessary condition for economic growth and prosperity. The foreign business community should view the reform agenda as a great opportunity to engage with Thailand even more than before in order to bring about a strong country with more economic opportunities for everyone, he added.

FTI chairman Supant Mongkolsuthree told the conference that during the past two months after the May 22 coup, the National Council for Peace and Order (NCPO) had been able to maintain peace and order while initiating a comprehensive reform plan to move the country towards a fully functioning and sustainable democracy.

“I believe that with peace and order on hand, we can regain our way of doing business as usual,” he said.

He added that the FTI and relevant organisations had jointly worked to restore investors’ confidence in Thailand and were seeking ways to work with the junta to amend regulations and laws that have hampered the process of doing business in Thailand.

Speaking on the topic of Thailand taking the lead as the AEC’s investment hub, panellist Frank Krings, chief country officer and general manager of Deutsche Bank, Bangkok, said the country was back to work after a long political impasse, which had brought important parts of the economy to a grinding halt.

The country should focus on six areas – building competency, embracing competition, creating inclusive frameworks for society and business, fostering innovation, driving technologies, and on the back of that, fostering transparency, all for the betterment of the country.

Kan Trakulhoon, president and chief executive of Siam Cement Group, said the current military government with absolute power should take the opportunity to amend laws and regulations that are obstacles to doing business in Thailand.

He added that Thailand should be the hub of regional operating headquarters of Asean and to achieve the goal the country must revise existing incentives to be much more attractive than those offered by other regional countries.

Another panellist, Boonchai Chokwatana, chairman of Saha Pathanapibul, said that after the military took over the administration of the country, “peace and happiness” has returned to most Thais, ending months of uncertainty. Confidence has also returned to the public and the business community.