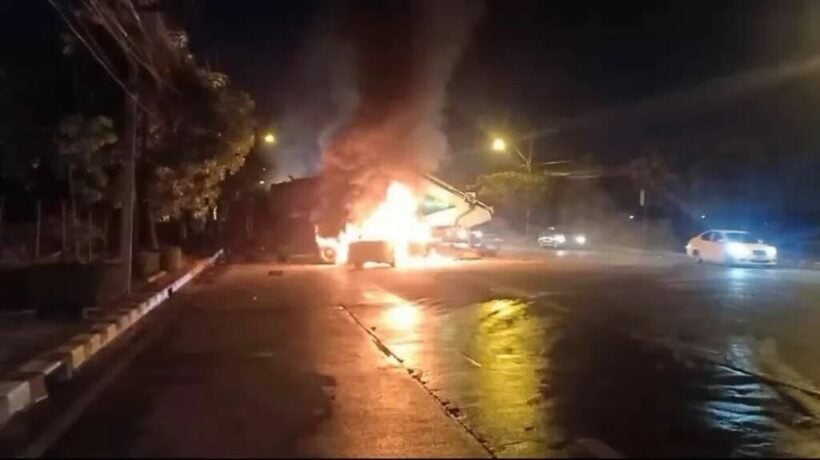 Early this morning, a taxi cab in Bangkok hit a freight truck. The taxi then exploded, trapping the driver inside who burned to death.

The fire ripped through the cab taking fire crews over 20 minutes to extinguish the blaze. The fire was so severe, a backhoe on the back of the truck was also damaged.

It took a further 2 hours to extract the charred remains of the taxi driver.

Pipat Uppasan, the 29 year old driver of the fright truck, says he was taking the digger from a construction site to a garage. Reportedly, he took an illegal U-turn which led to the taxi driver’s incineration. And the damage to the backhoe.

According to Thai media, a witness reported to police that he watched the trapped taxi driver waving his hands in an apparent appeal for help before the car exploded and the fire overtook him.

Police say Pipat may face a charge of reckless driving causing a death.

MikeW
Lucky the taxi didn't have any passengers
Objectivance
FFS, RIP mate. Guy who busted the illegal u-turn should do 60 mos in the booty house for being a mindless twit. Let any one of the countless individuals who've been locked up for crimes that didnt lead to death…

CCSA says no new restrictions are needed to fight Covid-19