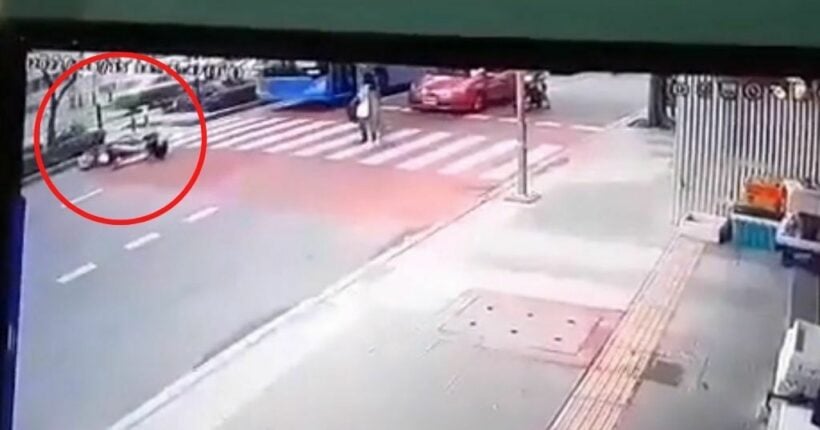 A motorbike driver who stopped at a zebra crossing to yield pedestrians the right of way was hit from behind by an oncoming public bus. Thais on social media have been sharing a CCTV video clip of the accident. Pedestrian safety has been in the spotlight in Thailand after the fatal accident last month where a police officer sped and crashed his Ducati motorcycle into an eye doctor, killing her.

Reports in Thai media say the driver from bus No. 29 Hua Lumphong to Rangsit insisted that he tried to stop but couldn’t do so in time, but those who have seen the video say the driver did not appear to even attempt to stop. The driver is now charged with reckless driving causing injury.

His girlfriend also told Thai media that the public bus company and driver haven’t contacted them or shown any responsibility for what had happened, adding that her boyfriend is the only one working to support the family. The girlfriend also told reporters that her boyfriend is always strict with the traffic rules and measures, and he always stops for the pedestrians who cross the road.

Stonker
11 hours ago, Guest1 said: Great, the reason for his braking just walked away! Yes, I really was genuinely shocked by that - just walked straight past. ... and you're right that they could / would have stopped for the…
Jason
8 hours ago, Transam said: That is sort of shifting the blame, surely any professional driver of a motorised vehicle should be reading the road ahead, plus, if he can't see a stationary m/cycle he shouldn't be in charge of…

Poolie
16 minutes ago, Jason said: In both my cases, the other driver was at fault (proven to be). The difficulty was being visible. Both drivers said they couldn't see me. And that was on a bright red scooter and with…

AussieBob
15 minutes ago, Poolie said: How did they prove that the first chap didn't look and the second turned without checking? Stop it Poolie - let them go mate - why embarrass.
HiuMak
On 2/21/2022 at 4:49 PM, Thaiger said: A motorbike driver who stopped at a zebra crossing to yield pedestrians the right of way was hit from behind by an oncoming public bus. Thais on social media have been sharing a…

How to do Marketing and Advertising in Thailand? Top 7 Tips