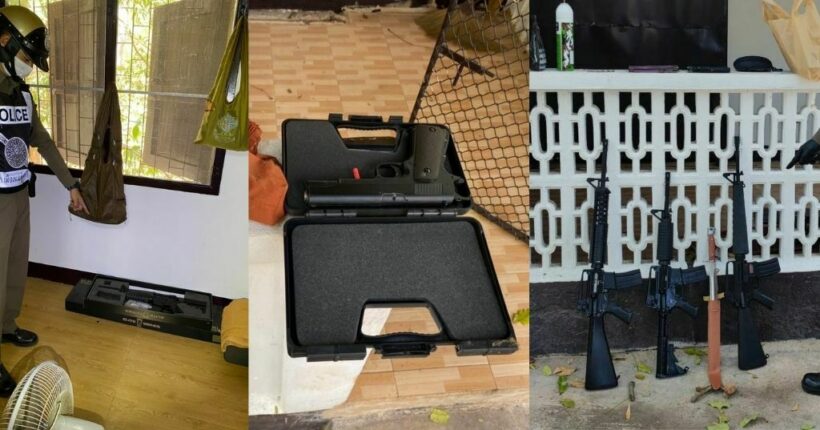 A monk allegedly fired shots at residents nearby a temple in the northern province Mae Hong Son yesterday. Reports say the monk fled the scene, but was later found and forced to leave monkhood. Officers searched the monk’s living quarters and found airsoft guns with equipment to modify the pellet guns as well as ammunition.

The monk had gotten into an argument over land ownership, a community leader told Thai media. The suspect and other 4 monks were clearing the land, claiming that the Doi Ja Tee Temple owned the property. But apparently, the land was public property and residents tried to explain this to the monks. He says the monk the took out a gun and fired shots at residents. No one was injured, but a bullet hole has found at a local house.

The monk allegedly ran off to another temple named Pa Baan Mai Temple, but he was later arrested. The officers from the from Mueang Mae Hong Son Provincial Police Station asked the monk to leave his monkhood and brought him in for questioning. Reports say the monk had claimed he was attacked.

The officers searched the living quarter and found four airsoft guns inside, including one that had apparently modified to use the real bullets. Officers also say they found equipment to modify the guns as well as a long knife. Another modified gun with real bullets at the scene where the monk allegedly shot at residents.

vlad
Luxury, we could only afford Spud guns.

palooka
Might be a relative of Putin. Putin likes to take over other peoples' lands with guns.