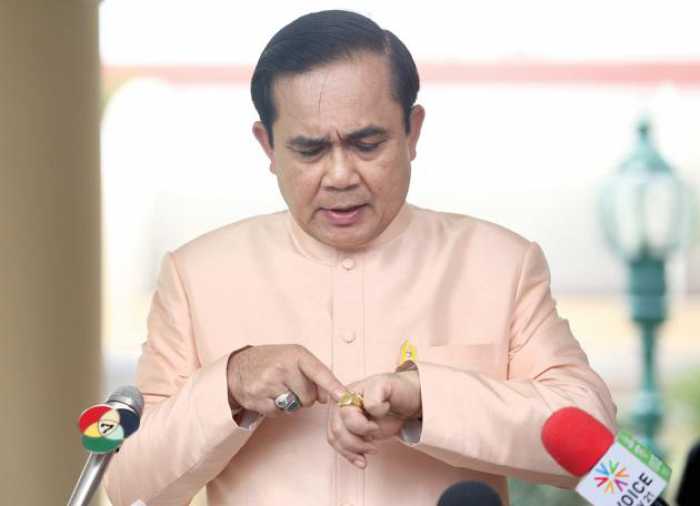 PHUKET: Prime Minister Prayuth Chan-ocha yesterday apologized for his bikini remarks in the face of an international outcry. Britain raised concerns after the junta leader suggested tourists in bikinis could be more vulnerable to attack.

“I want to apologise for everything if my remark was too harsh and caused misunderstanding,” Prayuth said.

“I’m sorry that it hurt people. I have too much pressure and feel sorry about the loss [of lives] whether they are Thais or foreigners.”

Prayuth on Wednesday drew condemnation after questioning the safety of female tourists in the Kingdom.

His remarks came just two days after the battered bodies of David Miller, 24, and Hannah Witheridge, 23, were found on the southern resort island of Koh Tao.

“They think our country is beautiful and is safe so they can do whatever they want, they can wear bikinis and walk everywhere,” Prayuth, who is also the junta chief, told top government officials during a policy address.

“[But] can they be safe in bikinis … unless they are not beautiful?”

The premier insisted that he did not intend to insult or blame anyone but just wanted to warn people to be more careful when travelling.

He said he contacted the British embassy to clear up the matter and would explain further in his weekly television programme today.

He said Thailand was still safe but, like other places in the world, bad people existed here, adding that he had instructed security officials to implement tough measures to protect tourists.

“Police must arrest the culprit [in the murder of Miller and Witheridge],” he said.

“We told them that the PM is ready to apologize if the remarks caused concern and affected the relationship between the two countries,” Sansern said.

Meanwhile, Deutsche Presse-Agentur reported that many Thais had reacted with outrage on social media.

It said one Facebook user labelled the comments “unbelievable and makes me ashamed that my country has anything to do with such uneducated and ignorant views”.

“A Twitter user asked rhetorically whether Thailand was to become ‘the first Buddhist country to adopt the burka as swimwear for women’,” author and commentator SP Somtow told DPA.

“It might bear pointing out that traditional Thai wear for women is topless. Much of what people think is morality is stuff that Christian missionaries brought over. It is not our culture.”

Pavida Pananond, a political economy professor at Thammasat University, said the premier’s comments “reflect a deep-rooted sexist belief that rape is caused by women acting or dressing improperly, not by men behaving unacceptably”.