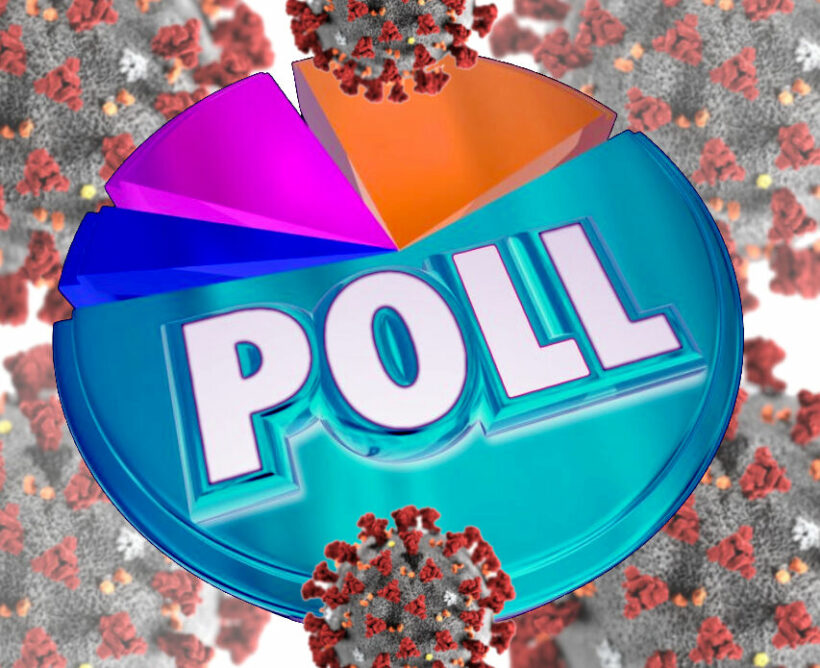 A new Suan Dusit Poll tells that over 60% of people think the Covid-19 situation in Thailand has become “very critical” with nearly 90% citing the soaring death and infections numbers as the biggest concerning factor and 78% concerned over widespread business closures. A jarring 78% of respondents complained that the government needs to stop putting their profits over the struggle of the people of Thailand in dealing with Covid-19.

The poll, conducted by Suan Dusit Rajabhat University, interviewed 1,702 people across Thailand online about Covid-19 in a 10 day period from July 5 to 15.  The survey reflected the nation’s fears as Covid-19 cases climb, medical supplies and beds and staffing see shortages, vaccinations are creeping along far behind schedule, and many are critical of the government response to the mounting situation.

Only 15% of people thought the situation was fairly critical, with 24% calling it critical and 61% considering it very critical. Opinion was divided on how long it might take Thailand to recover from the growing Covid-19 crisis. less than 10% believed recovery was possible in 6 months while close to 28% thought it would take at least a year. About 26% believed Thailand could bounce back in 2 years while the biggest percentage of people, nearly 37%, foreseeing more than 2 years before the country recovers.

Those surveyed in the poll felt there is a lot the government could and should be doing to help the Covid-19 situation. The most widely held opinion was that the government should not be making a profit instead of helping the people, with over 78% of people expressing that opinion. Nearly as popular, about 77% believe medical workers should get high-quality vaccines immediately, while 75% think the government should be prioritising getting various higher quality brands of vaccines into Thailand as fast as possible.

About 75% felt that high-risk areas should be sealed and the government should be doing far more active testing to find infections. Starkly put, 70% of people believed that government leaders need to stop playing politics and let opposing parties the chance to take action to help the Covid-19 struggle.

When given a list and allowed multiple answers to the question of what makes the Covid-19 situation so serious now, just under 90% of people cited the continually rising number of infections and deaths, with 81% worried about how many medical workers had gotten Covid-19. Nearly 78% had concerns over business closures throughout Thailand and the unemployment it brought. Just about 76% of people complained about the low quality of vaccines and the severely slow rollout of widespread vaccination and just under 74% believe the Covid-19 situation in Thailand was not close to being under control.

49% of those surveyed in the Suan Dusit poll said they hadn’t received any vaccine yet, while 39% had one injection and just under 12% were fully vaccinated against Covid-19. Interestingly, those who received one Sinopharm or AstraZeneca vaccine wanted the same for their second injection, in Sinovac receipiants, 30% wanted Pfizer, 26% wanted Moderna and 22% wanted a second Sinovac shot. 50% of Sinopharm recipients wanted the same as a second shot, while 25% favoured Moderna and about 17% wanted Pfizer. 42% of AstraZeneca recipients wanted another AstraZeneca shot with 25% wanting Pfizer and 24% preferring Moderna.

BookShe
Critical? I have to disagree. Indonesia is critical. Thailand is in between. Just like Chernobil. As long as you can party in Samui or traveling around Thailand every day it ain't critical.  Not great nor terrible. The rest is history

AlexPTY
It's like asking a bunch of monkeys to suggest a buffalos how to fly an airplane
BookShe
Please don't tell me that you don't see the same analogy here with the dosimeter and the test kits. How many test positives we have? 900. "Not great not terrible." But sir, we only  have 900 test per day. Ahih
That's an ugly photo, looks like a kid used paint to edit it. Doesn't look professional for a news article!! It's like toothpaste ads or something ?
Graham
Thai government help, not profit ? Never going to happen. I think it would be very interesting to see the current bank account status of current government members to see how much skimming and dare I say it "corruption" has…