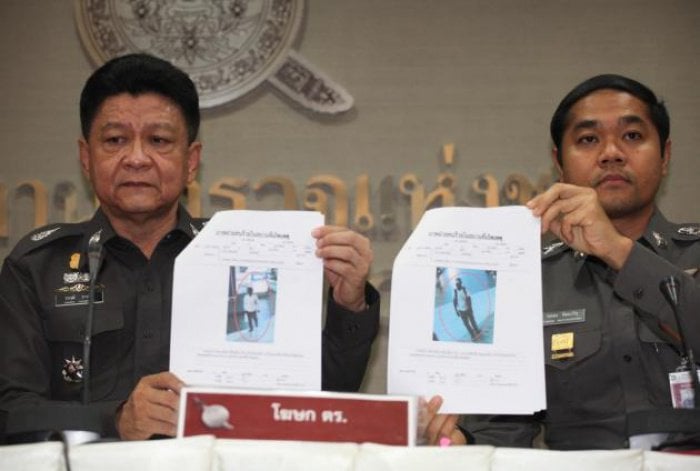 “According to the police intelligence service, the bombs probably came from the same source – the containers for the bombs and the materiel used. There are connections between all of these,” he said.

Gen Jakthip said police had now ruled out a theory that the pipe bombs were planted by rival vocational students. “I have said all along that 80-90 per cent of bomb attacks [are found to be] politically motivated. These people will carry out attacks again when they have the chance,” he said.

Gen Jakthip quoted the driver of a taxi who drove the two suspects to the scene as saying they spoke Thai, and “one was good looking and the other so-so-looking.”

Police have acquired arrest warrants issued yesterday for the two suspects based on police sketches relying on footage from a surveillance camera. The two have been charged with premeditated murder, causing explosion deemed dangerous to others, and carrying around explosives without a good reason.

Spokesman Lt Gen Prawut Thawornsiri said police believed there were more individuals behind the bomb attacks than the two suspects seen in the footage. He said reports about the two suspects now fleeing to the far South could not be confirmed. Unlike Gen Jakthip, Gen Prawut offered no solid evidence linking the two men with any other groups.

A police source said the suspects were connected to a former Army paramilitary ranger, with expertise in explosives as an instructor, who was in custody after being arrested late last year in Lop Buri.

The source said the two suspects travelled to Bangkok by a commuter van and got off at a shopping complex, before hailing a taxi to Siam Paragon.

A joint military-police manhunt for the two men is underway while the probe is being extended to other individuals believed to be behind the bombings and their activities.

The source said the former ranger was allegedly involved in most recent incidents of political violence and his men were ready to operate when ordered.

The former ranger was also connected to groups of people in possession of war weapons in large caches hidden in Lop Buri and Samut Sakhon that were seized in military-led raids after the seizure of power in last May. These people were found to have had links with a woman living abroad who is a leader of a movement against Prime Minister Gen Prayut Chan-o-cha, the source said.

Metropolitan Police Bureau commissioner Lt Gen Sriwara Ransibrahmanakul said the pipe bombs used in the attacks near Siam Paragon had physical conditions similar to those used in a bomb that exploded accidentally and killed two people who were carrying it on a motorcycle. Police would still need to rely on evidence and other details about pipe-bomb attacks in other incidents, along with profiles and photos of bombers in more than 20 incidents since 2010 when political violence began.

He said seven teams of investigators were working on the case, seeking out the two suspects whose whereabouts were not known. As for the footage not showing the suspects’ faces clearly, he said police were also relying on a lead about their possible identity, while awaiting more tip-offs.

Hunt on for Bangkok bomber ‘Dragon’