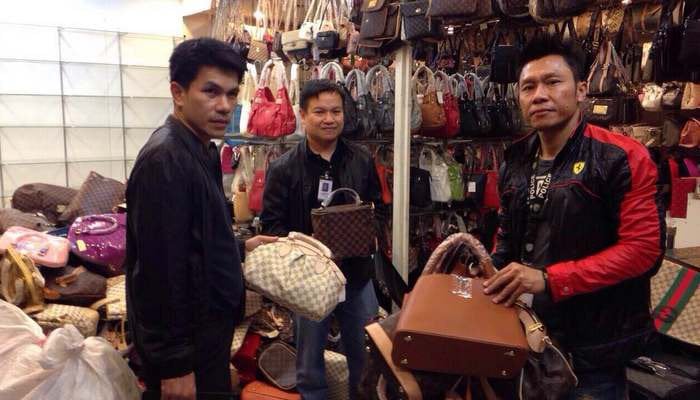 PHUKET: Fake brand-name products valued at nearly 3 million baht were seized on Tuesday in police raids on shops in Patong.

The early evening raid, led by officers of Economic Crime Division 4 (ECD 4), resulted in the seizure of more than 2,200 counterfeit items masquerading as luxury brands, including Louis Vuitton, Channel, Prada, Nike, Adidas, Calvin Klein and Billabong, among others.

“Altogether, we seized 2,212 counterfeit products valued at almost 3mn baht from four different shops – two in a building on Rat-U-Thit 200 Pi Road behind SB Plaza, and two other shops on Thaweewong Road,” said Col Theera Thongrayub, the superintendent of ECD 4.

“Pirated products are a big problem in tourism destinations such as Bangkok, Phuket, Pattaya and Koh Samui. As ordered to by the government, we are cracking down on the problem,” he told the Phuket Gazette.

The four people arrested will be charged with selling trademark counterfeit products, which carries a penalty of two years’ imprisonment, or a fine not exceeding 400,000 baht, or both, Col Theera explained.

“We will also continue our investigations into the owners of these four shops so that they can be brought to justice,” he said.

Counterfeit goods valued at nearly half a billion baht were seized in Phuket and other southern provinces in 2013. The horde of goods was incinerated in Phuket Town in June last year (story here).