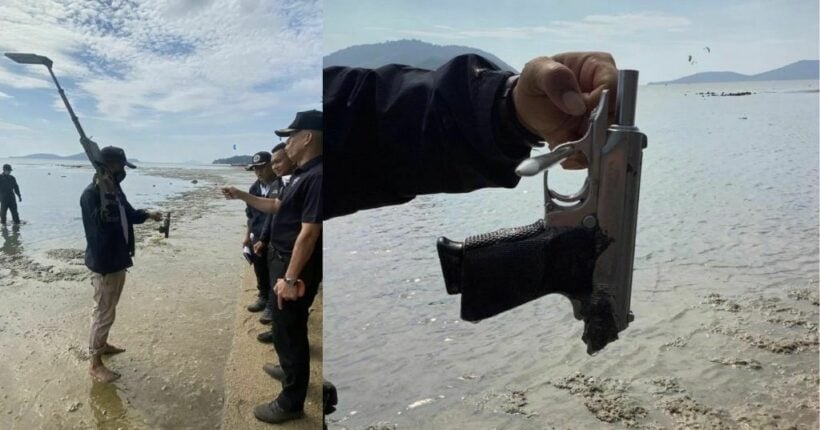 Police have found two guns at a beach in Phuket which they believed were used in the recent murder of 32 year old Jimi “Slice” Sandhu, a notorious gangster from Canada. Sandhu, who was born in India, was deported from Canada for “serious criminality” in 2016. He entered Thailand by private jet on January 27 carrying a fake Canadian passport with the name “Mandeep Singh.”

Officers used metal detectors to search the seaside by the Rawai beachfront villa where Sandhu was killed and found a semi-automatic Walther PPK and a CZ gun in the water. According to reports in Thai media, the guns were registered to Thais who were “influential” and they will be questioned. Police officers say that the two main suspects in the case travelled out of Thailand on February 6, according to reports.

Yesterday, police said they obtained video footage from CCTV cameras showing two men wearing white hoodies, with the hood pulled up, approaching the property from the bushes. Officers say the men shot Sandhu multiple times at 10:56pm last Friday before fleeing the scene. His body wasn’t found until the next morning in the villa’s parking lot.

According to the Vancouver Sun, Sandhu was a high-profile gangster who continued to have influence in British Columbia after he was deported.

King Cotton
27 minutes ago, palooka said: Somewhere some bright spark said "never bring a knife to a gunfight". And, as The Wombats sang . . .

longwood50
2 hours ago, ctxa said: The fact they fired 19 times and only hit 10 being in front of the target.... says a lot. Hey that is not bad. If they were a professional baseball player they would be the…

longwood50
2 hours ago, Thaiger said: Officers used metal detectors to search the seaside by the Rawai beachfront villa where Sandhu was killed and found a semi-automatic Walther PPK and a CZ gun in the water. Well tomorrow we can expect…

Noble_Design
1 hour ago, ctxa said: In the end guns are for snowflakes, lol. Asian gangsters tend to very much prefer knifing someone. And I guess in this case it would have even been more appropriate. Even if the Canadian…
vlad
4 hours ago, Guest1 said: Finding the guns means not, that they find the shooter. But it gives them credit, for "intense searching". I would not wonder, if that is the last we here about any findings in this case!…

Bollywood actor to become monk for 15 days, wants to promote Buddhism in India