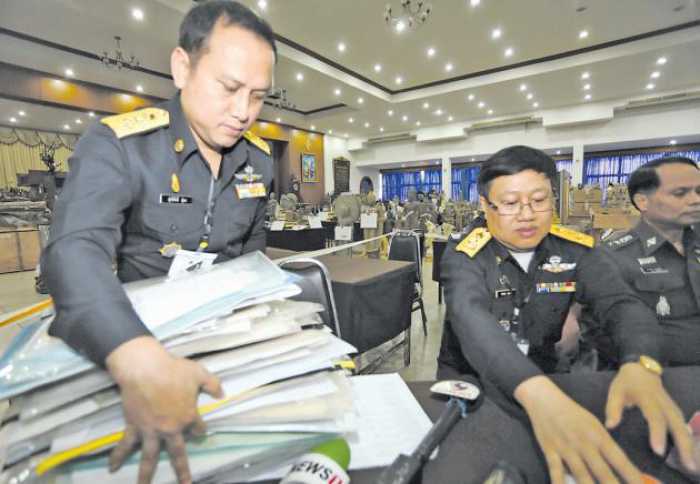 PHUKET: The brother of a Pattani-based businessman who is missing after facing allegations of running a contraband-petrol trade in the South met Bangkok police yesterday to defend his sibling, saying he was framed and may have been abducted.

Warakorn Jiansermsin called on the media to help track his brother, adding that he did not believe the so-called list of bribe-takers that police said they had seized from Sahachai’s home actually existed.

Sahachai has been sentenced to a year and nine months in jail for forging court seals, in addition to suspicion of him running an illicit but lucrative petrol trade for years, while paying bribes to a large number of police and security officials, including former crime-buster Lt Gen Pongpat Chayaphan.

Sudathip Muangnual, a woman believed to have links with Gen Pongpat’s debt-collecting and intimidation racket, was taken into custody yesterday after her request for bail was rejected. She is married to Pol Colonel Kowit Muangnual, a former Immigration Police chief in Samut Sakhon, who is already in jail for being part of Gen Pongpat’s racket.

Sudathip was charged with lese majeste and other offences, including questionable canteen deals in which she claimed royal backing.

Some 20,000 items of valuables and artefacts are also being catalogued and will be made public for verification or reclamation.

Though Amlo has not frozen the 32 title deeds of real estate Gen Pongpat acquired before October 1, 2010, when he was made chief of the Central Investigation Bureau, it is looking into details in the documents and checking to see if these properties were acquired lawfully.

The Bangkok Remand Prison has put the six police officers who were part of Gen Pongpat’s racket in the same detention cell for their own safety, prison commander Aryut Sinthopphan said yesterday.