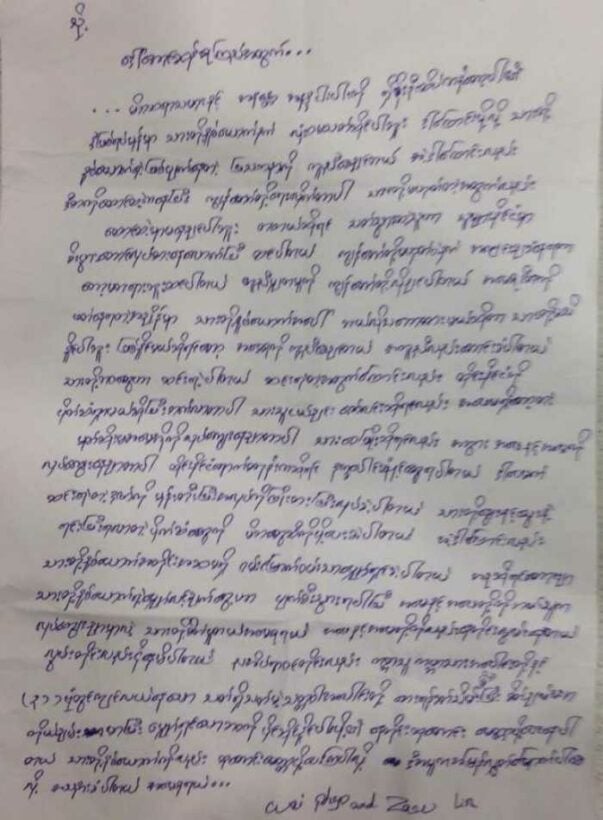 PHUKET: Two Myanmar men charged with murdering two British tourists in Thailand have written to Nobel Peace laureate and Myanmar opposition leader Aung Sang Suu Kyi pleading for help, protesting their innocence and claiming to have been “scapegoated” by police.

The bodies of David Miller, 24, and Hannah Witheridge, 23, were found on a beach on Thailand’s southern island of Koh Tao on September 15.

News of the murders discouraged tourists and the shortcomings of the investigation generated criticism of the police.

Myanmar workers Zaw Lin and Win Phyo, both 21, on Monday pleaded not guilty to the charges against them.

Thai police had arrested the pair in October, saying their DNA matched samples found on the victims.

“We don’t want to stay in prison because we didn’t do it,” they said in the letter to Myanmar opposition leader Suu Kyi, which was signed by both.

“We think it is an injustice that we were scapegoated. We would like justice.”

Representatives of Suu Kyi were not available for comment yesterday.

Zaw Lin and Win Phyo said they were poor workers who came to Thailand to support their families.

“We sent the money we earned through blood and sweat to our parents. That made us immeasurably happy,” they said in the letter, written in Burmese and released by their lawyer.

The first hearing in the case will take place on December 26, according to their lawyer, Nakhon Chompuchat.

Migrant workers often face discrimination in Thailand and have previously been used as scapegoats for crimes.

The murder investigation has been marred by accusations of police incompetence and torture. The suspects said they were beaten and threatened by police, but the police deny this.

Tourism generates almost a tenth of the gross domestic product of Thailand, which had already been struggling to recover from months of political upheaval that culminated in a May 22 coup. Martial law since then continues to deter visitors.