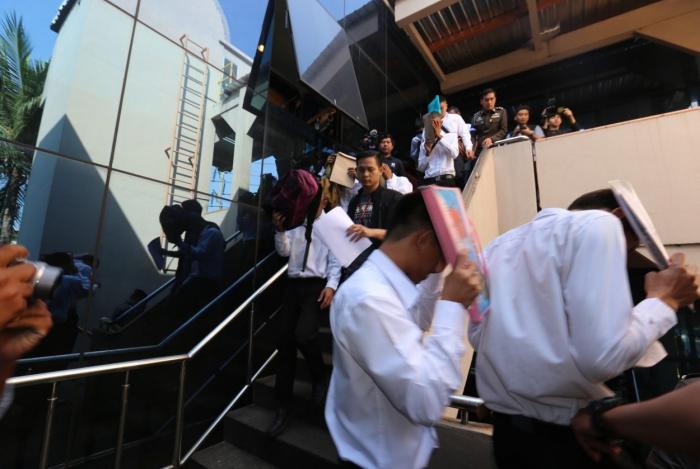 BANGKOK: TEN people suspected to have cheated in a police entrance exam in December were arrested on Tuesday morning as they attended cadet orientation at a Police Club in Bangkok.

Arrest warrants were issued for at least 51 students regarding the case last month (story here).

“The 10 men, accused of copying exam answers from others, were wanted on charges of racketeering, giving false information to police and violating the Article 14(2) of the Computer Act by putting false information into a computer,” Metropolitan Police Bureau commissioner Lt General Sanit Mahathavorn said.

Gen Sanit confirmed that all those shown by evidence to have been involved in exam cheating would face prosecution. Police would deal with ‘successful’ candidates first, he said, as the cadet class would start today.

“The suspects would be removed, leaving room for substitute candidates to take their spots.”

The bureau had announced 1,141 successful candidates – including 141 substitutes. So, when 22 candidates did not show up and 10 were arrested, the first 32 substitutes on the list were moved up to replace them.

Meanwhile, Maj General Adul Narongsak, the deputy bureau chief in charge of the investigation, said the 10 men arrested were among the latest batch of 35 wanted suspects, and police would summon the other 25 tomorrow. He said arrest warrants had so far been issued for 87 people and more warrants might be issued soon. Gen Adul said there were over 300 people allegedly involved in the case, and investigators would gradually deal with them in groups.

Meanwhile, national police chief General Chakthip Chaijinda said he had instructed officers to extend the probe into exam cheating. To date, cheating has been detected at the Metropolitan Police Bureau and the Provincial Police Regions 1 and 7, but he wanted to see if there were any more reports of cheating at other police units or state agencies.

Police later allowed the 10 suspects to be released on bail yesterday, after they put up a 100,000 baht bond. They were told to meet police on February 16.