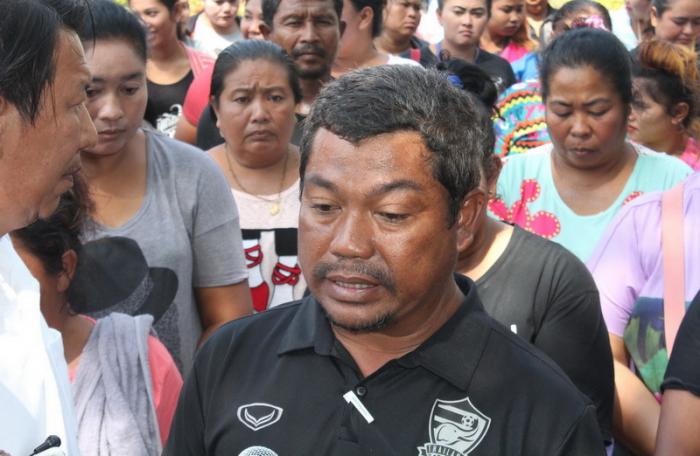 PHUKET: About a hundred emotional Rawai sea gypsies gathered outside a Phuket court that ruled in their favor this morning, resolving years of disputes about land ownership and encroachment.

Coconut trees in the pictures of His Majesty King Bhumibol Adulyadej’s 1959 visit to the area rank among key pieces of evidence that acquit four long-time residents of land encroachment charges.

“The court has examined several pieces of evidence, including pictures of His Majesty King Bhumibol that were taken in 1959. Included in the pictures are coconut trees, which the plaintiff claims are just 10 years old, but which were present even 60 years ago, at the time of His Majesty’s visit,” Mr Nirun said.

Sea gypsies gathered outside the court to express moral support for the four defendants, many of them crying tears of joy after hearing the court’s verdict.

The land owner, who held a title deed (chanote #8342) declaring him to be the legal owner of the land, had been at loggerheads with the sea gypsies for years, who claimed that they had been living in the area for a century.

Exasperated by the never-ending battle over land ownership rights, some land owners had previously even offered to sell their plots to the government in order to resolve the dispute (story here).

The sea gypsies, however, turned down the provincial government’s offer to purchase 19 rai of disputed land (story here), insisting that the land deeds must be revoked entirely (story here).

Chanote # 8342, which was previously presented as proof of land ownership in court, impacted nine families in total. The court has so far ruled in favor of six families, four this morning and two on December 13, while three cases remain undecided. The title holder did not show up at court to hear the verdict.

“We are the real owners of the land and have been living there for decades before the chanote was even issued in 1955,” said a visibly emotional Mr Nirun. “We have made a life for ourselves here. Our roots, and those of our ancestors, originate from here. We have been here for more than a 100 years.”

A court had previously ruled against the sea gypsies, citing ‘lack of evidence’, but the appeals court, after taking into account evidence presented by the Department of Special Investigation (DSI) and DNA evidence from dating skeletons found in the area, ruled in the sea gypsies favor.

Additionally, a student-enrollment list from Wat Sawang Arom Rawai, one of the oldest schools in the area, shows that sea gypsy children were enrolled there in 1954, a year before the chanote was issued.

“We hope the remaining three families get a favorable ruling as well. We want to thank everyone who has helped us; without the support of the DSI, police and other relevant officials, we would never have been here today, despite being the true owners of the land,” a sea gypsy villager said outside the court today.