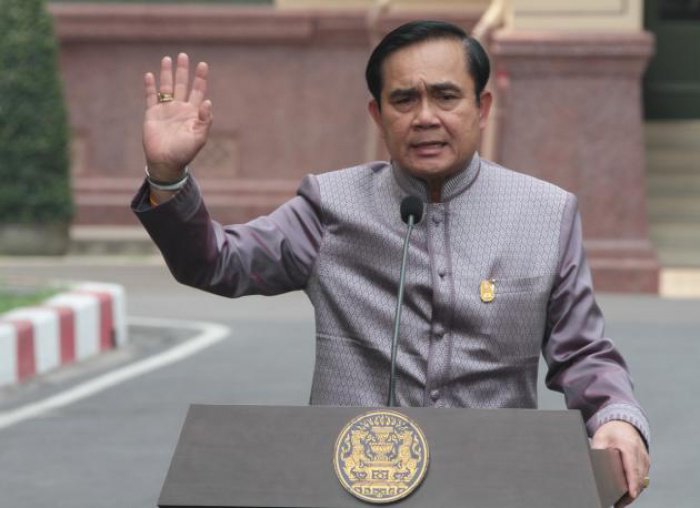 PHUKET: Prime Minister General Prayut Chan-o-cha yesterday launched a full rebuttal against Daniel Russel, the visiting US assistant secretary of state for East Asian and Pacific Affairs, saying the coup was staged to save democracy and that martial law would not be lifted because it could lead to political disturbances.

“Thai democracy will never die, because I’m a soldier with a democratic heart. I have taken over the power because I want democracy to live on,” the junta-leader-cum-prime minister declared, adding that the situation in Thailand was unique, as nowhere else was a coup staged to restore democracy.

“We are building democracy every day I did not seize power to give money away to this or that person or take it as my own property.

“Although this government came from a seizure of power, it happened because there was no [effective] government [at the time]. Though there was a government, it was as good as not having one. Where was Yingluck [Shinawatra]? She couldn’t perform her duty” because she had been removed by the Constitution Court, PM Prayut said.

He added that people should recognize the fact that Thailand is still free.

He said he could have exercised his power as junta leader and placed Ms Yingluck under house arrest or stopped her from meeting certain people, but he chose not to do so.

PM Prayut added that Foreign Minister General Tanasak Patimapragorn had briefed him about the meeting with Russel on Monday. PM Prayut did not get to meet Mr Russel.

PM Prayut said as many as 21 envoys had met with the current administration and understood the situation in Thailand.

He also said he was ready to present himself at the United Nations General Assembly in September to explain the situation to the world.

Mr Russel was the highest-ranking US official to have visited the Kingdom since the coup last May. He urged the government to lift martial law and described Ms Yingluck’s impeachment by the junta-installed National Legislative Assembly as being “politically driven”.

“The perception of fairness is important. I will be blunt here: When an elected leader is deposed, impeached by the authorities that implemented the coup, and then targeted with criminal charges while basic democratic processes and institutions are interrupted, the international community is left with the impression that these steps could be politically driven,” he was quoted as saying this week.

Mr Russel met on Monday with Ms Yingluck, who said after the impeachment on Friday that “democracy is dead”. The US official also met Democrat Party leader Abhisit Vejjajiva.

Mr Russel also said all reforms in Thailand should be inclusive, but this could not be achieved as long as martial law is in place, as it restricts freedom of expression and assembly.

PM Prayut has denied that the impeachment against Ms Yingluck was politically motivated.

As for martial law, PM Prayut said Foreign Minister Gen Tanasak had asked Mr Russel what the United States would do if faced with a situation like Thailand, in which martial law was necessary to maintain law and order.

The prime minister said Gen Tanasak did not receive any answer other than Mr Russel saying he would have to think about it.

5-day break in May backed by Cabinet