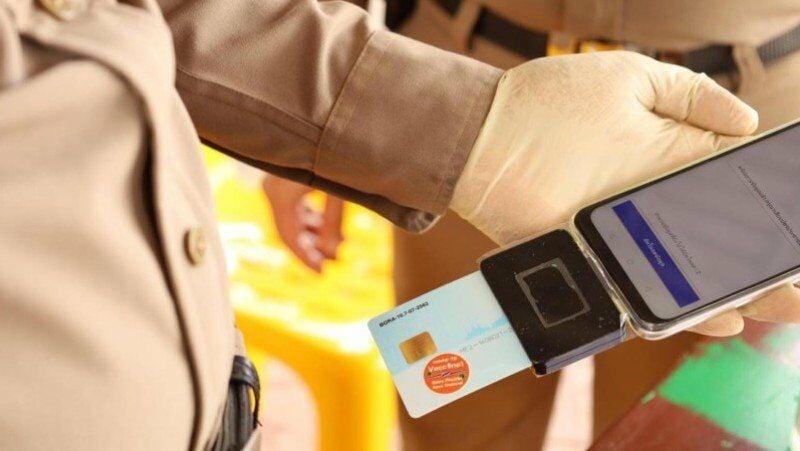 Officers at Phuket’s main checkpoint in Tha Chatchai will be screening Thais entering the island province to see if they have outstanding arrest warrants. The Region 8 Police Chief donated 51 smart card readers to scan ID cards as well as 20 smartphones.

PM Prayut Chan-o-cha had called on government agencies to tighten safety to support tourists in Phuket following the death of a Swiss woman who had entered under the “Sandbox” reopening scheme. Police have arrested a suspect on murder charges. The police chief says the tightened security at the checkpoint will boost confidence among tourists.

Region 8 Police Chief Kitrat Panpetch handed over the smart card devices yesterday which are said to be valued at 14,359 baht. Reports do not say how much the smartphones cost.

Aganit adds that the police have cooperated with all the relevant officials in Phuket. Officers from the Royal Thai Army, Phuket Immigration, as well as the Phuket Public Health Office and local police are working together at the checkpoint.

Using a smartphone application and smart card readers, police will check and note the criminal history of all Thais entering the island by land. The police chief told Phuket News that he hopes to see concrete results.

“It also makes for a higher level of crime prevention, as well as boosting confidence among tourists traveling and coming to Phuket.”

ThailandBob
12 hours ago, bushav8r said: Thai identity card - Wikipedia Vague and non-specific to Thai iD. In my last job as a govt contractor, I developed a Java app that verifies the security of PIV, PIV-I and CAC cards. The…

ThailandBob
I'm sorry that I went to the wrong link back there. No glasses to day - in the shop. The identity card link is indeed about Thai.

bushav8r
10 hours ago, ThailandBob said: I'm sorry that I went to the wrong link back there. No glasses to day - in the shop. The identity card link is indeed about Thai.  No problem.  Also,  I don't think paperwork will…

I Am Strong Fundraiser by The Thaiger – Report #1, Phuket