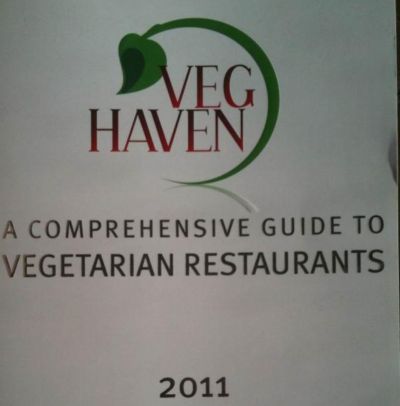 Phuket Lifestyle: Turning away from meat?
Phuket Gazette / The Nation

PHUKET: More and more meat eaters are turning their backs on steaks and even fish in favor of healthy vegetarian fare as part of their personal healthcare regime. However, many complain there are not many options when it comes to vegetarian dining.

But the editors of “Veg Haven” are confident that vegetarians will be spoiled for choice when travelling in the region. This well-researched, comprehensive guide brings together Southeast Asia’s leading vegetarian restaurants in Thailand, Singapore, Malaysia, Indonesia, the Philippines, Hong Kong and Macau.

It kicks off with Singapore, which has the most entries in this guide, even though Thailand, in terms of the variety of flavors, has a better range.

Basically the book features listings of vegetarian establishments that mostly offer Indian, Chinese, Western and local fare. Many are Indian because vegetarianism has deep-rooted origins in ancient India and connects with the idea of non-violence towards animals as part of the natural order.

Each entry has a two or three line description of the food and the restaurant, plus practical information about the venue and discount coupons for use in the featured countries.

Thai readers will be pleased to find that there are far more vegetarian restaurants than they knew about. The Thailand section lists outlets not just in Bangkok, but also in Chiang Mai, Pattaya and Phuket. Many entries are Indian restaurants.

Throughout the region, Indian food remains the most popular, followed by Chinese and Thai cuisine. So keep the guide handy if you are in the mood for daal and chapati, or vegetarian noodles for your next meal.

PHUKET: No stranger to Phuket with several landmark projects in the resort province, the Bangkok-based mega-developer Supalai PLC says it plans to launch 19 new residential projects to boost pre-sales to 20 billion baht this year, up from 14 per cent of its pre-sales of 17.5 billion baht last year.

The company’s CEO Prathep Tangmatithum said yesterday that six of the 19 new projects will be condominiums in Bangkok and its suburbs, with the other 13 to be low-rise residences in Bangkok, Phuket, Khon Kaen, Songkhla and Chiang Mai.

The company is aiming to boost pre-sales from the provinces from 13 per cent of total pre-sales last year to 16 per cent this year, he said.

The company has also set aside an investment budget of 4 billion baht to buy undeveloped land this year for new residential projects next year.

Currently, the company is developing 60 residential projects with a combined 30,000 units worth 100 billion baht. Of that, 22 billion has already been sold and is awaiting transfer to customers this year and next year.

Most Supalai projects to date in Phuket have been sited in Thalang.