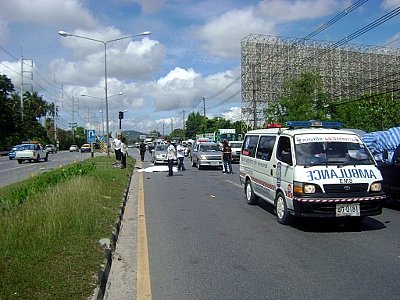 PHUKET: In our third story on Phuket road carnage today, a Swiss man was killed instantly when his motorcycle was hit by a passenger car on Thepkrasattri Road in Thalang early this afternoon.

According to Phuket Kusoldharm Foundation rescue workers at the scene, the Swiss man was traveling southbound on Thepkrasattri Road when he was hit full force by a Bangkok-registered Toyota Vios.

The accident occurred at about 12:50pm near the u-turn in front of the Ban Nai Khlam Mosque in Srisoonthorn subdistrict, Village 1.

The man’s injuries included massive cranial trauma, which is thought to have killed him instantly, rescue workers said.

The driver of the sedan, a woman, was still in the vehicle in a state of shock when rescue workers arrived. Her vehicle suffered considerable damage to the fender and a shattered windshield, but there were no reports that she suffered any injuries.

The identity of the 56-year-old victim is known to the Phuket Gazette but is being withheld pending notification of kin.

“Ae Inside’ murder: Phuket police refute need for outside help