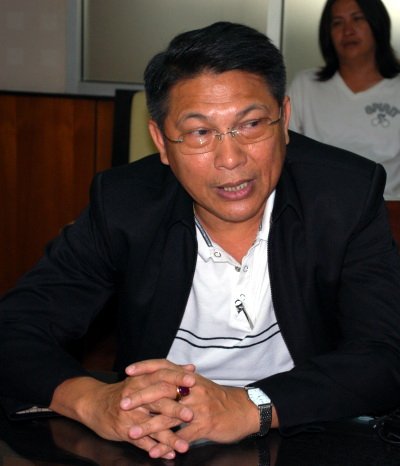 PHUKET: The Deputy Commander of Provincial Police Region 8 has spoken out against outside police help in the investigation into the murder of Phuket journalist Wisut ‘Ae Inside’ Tangwitthayaporn.

Maj Gen Pisan Chuldilok made his announcement yesterday – just one day after the Phuket Reporters’ Club submitted a request for Prime Minister Yingluck Shinawatra to personally appoint the chief investigator in the investigation.

Reporters Club President Peerapong Polpramoon said local reporters were concerned that local police would not be effective in bringing to justice the unnamed influential person behind the killing.

“Region 8 Commissioner Lt Gen Santi Pensute views this as a very important case as it concerns the safety of the media. With all the investigation teams from Police Region 8, Phuket Provincial Police, and Phuket City Police Station we have working on the case, I am quite confident that we will be able to find who was behind this assassination,” said Maj Gen Pisan.

“We are working hard on this case. We don’t need any help from the Crime Suppression Division or the Department of Special Investigation. We are quite able to handle this case by ourselves. However we will need the scientific evidence to help with the case,” he added.

Maj Gen Pisan said police were investigating several motives in the hunt for the killers.

“One motive concerns the story that Mr Wisut wrote about the issuance of land title deeds at Freedom Beach in Patong and Nakalay Beach in Kamala,” he said.

In the last issue of his Thai-language political journal Inside Phuket, Mr Wisut wrote that he had been threatened by people who had lost out on the benefits of wrongdoing.

The land came to the attention of authorities after an attempt to sell it for nearly 4 billion baht.

Mr Prompong on Friday confirmed to the press that the people to be investigated in the land-title probe included many high-ranking government officials.

However, Maj Gen Pisan yesterday added that another possible motive was retribution over Mr Wisut’s publication of a story about illegalities within the system of the transfer and promotion of government officers.

“Mr Wisut had written an exposé on the transference of government officials and mentioned in his December issue of Inside Phuket that he had been threatened by an anonymous person as a result,” said Maj Gen Pisan.

“Another motive may be a political issue because Mr Wisut was the secretary of the Phuket United Front for Democracy Against Dictatorship (UDD), or red shirt, community,” he added.

“We have dismissed the motive of romantic affairs as we have found no evidence to support that theory,” he added.

Maj Gen Pisan said that all the motives police found so far point to someone losing out financially. The police are now focusing their efforts on identifying the assassins and who they were working for.

“We have checked the video from CCTV a camera but the images are not clear and the gunmen wore helmets. We also had the license plate number of the motorcycle, but that number doesn’t exist.

“However, we can use the video as the evidence once we arrest the assassins,” said Maj Gen Pisan.