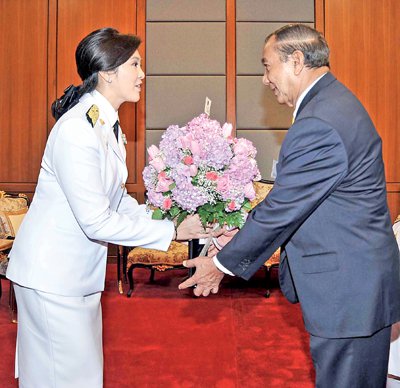 Passing on Thaksin pardon
The Nation

The government appeared to bow to political pressure last week when it backtracked on a plan to grant former prime minister Thaksin Shinawatra a pardon on the occasion of HM King Bhumibol Adulyadej’s 84th birthday.

The People’s Alliance for Democracy (PAD), the conservative pressure group better known as the “yellow shirts”, cancelled a planned protest against the move after Justice Minister Pracha Promnok confirmed that the fugitive former prime minister would not be among convicts eligible for a pardon.

Mr Thaksin was convicted of conflict of interest in a land deal involving his wife Khunying Potjaman Na Pombjera in 2008. He claims the conviction was politically motivated and lives in Dubai to escape a two-year jail sentence.

Controversy flared earlier in the month when it emerged that the Cabinet had held a secret meeting to discuss the issue of this year’s royal pardon decree. Prisoners are released on pardon every year on December 5 to coincide with HM The King’s birthday.

Mrs Yingluck was not present at the meeting, leading to speculation that her brother was the subject of the discussion.

Critics claimed the government had drafted a royal decree that waived the usual requirement that those who received a pardon had already served more than five years or one-third of their sentences in order to benefit Mr Thaksin.

The PAD vowed to protest against the move outside the government’s legal advisory body, the Council of State, claiming the decree was unconstitutional.

Analysts noted that the move would put HM The King in a difficult position, since Mr Thaksin remains a highly polarizing figure in Thailand.

But a groundswell of commentary attacking the move may have caused the government – and its patron Mr Thaksin – to backtrack.

On November 20, the exiled billionaire released an open letter to the media in which he appeared to play down the possibility of his own pardon.

“I trust in the principle that the government will not do anything that will benefit me or any individual specifically,” he wrote.

Mr Pracha subsequently confirmed that Mr Thaksin would not benefit from the decree.

“Thaksin will not receive any benefit from the decree, and his name will not be included on the list of convicts eligible for a royal pardon,” he said.

“Convicts on the run will not be eligible.”

The PAD cancelled their planned rally, saying it was “no longer necessary”.