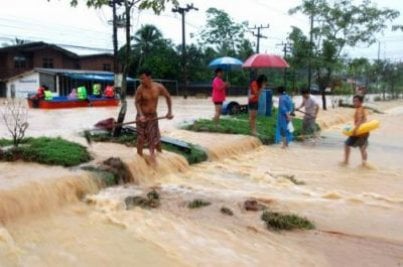 PHUKET: Songkhla, Yala and Nakhon Si Thammarat provinces in the South have been inundated by flash flooding after days of heavy rain.

Disaster status – signified by red flags – has been announced in Hat Yai, the business center of Songkhla province. Car owners have begun to park their cars on elevated roads or high ground, similar to the practice seen in Bangkok and other central provinces during the peak of the devastating floods in October and November last year.

The red flags mean that emergency evacuation could be announced immediately.

Elsewhere in Songkhla, two key roads leading to a border crossing in Sadao, a key gateway to Malaysia for Phuket visa runners, have become impassable due to inundation. And a number of seriously ill patients at Sadao Hospital have been airlifted to Hat Yai.

In Na Thawee district, a major hospital was flooded, prompting relocation of patients to its second floor, while military trucks have been put on standby for evacuation if the floodwaters rise.

In Yala province, shelters have been set up after inundations to levels of up to one metre occurred following heavy downpours yesterday and Friday. Yala municipality in the provincial capital is under high-level floodwater.

Provincial Governor Dejrat Simsiri said the situation should ease and return to normal by tomorrow if there is no more heavy rain. Many flood victims are said to be in need of ‘flat-bed’ boats for transport of their household belongings after three roads were flooded.

Fishing trawlers are docking at or returning to the coast of Nakhon Si Thammarat province following high seas due to a cyclone, especially on the Talum Phuk peninsula, which is the area most exposed to tidal waves and strong gusts of wind.

Mudslide warnings have been issued to homes located near the Luang mountain range, where such slides regularly occur.

Elsewhere in the South of Thailand, a weather report forecasts heavy rain from a monsoon travelling from the East of the country and a depression over parts of Malaysia. The Thai provinces expected to be affected today are Phatthalung, Pattani and Narathiwat, where floodwaters have not yet been high or widespread. Residents of low-lying areas have been warned to brace for flash flooding and mudslides in areas near the base of hills.

All of the flood-affected and flood-risk provinces in the South are along or near the east coast. Here in Phuket, on the west coast, heavy rains last night caused major flooding along some roads but there were no reports of road closures.