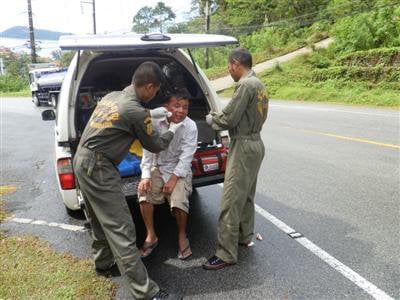 PHUKET: A young Russian woman died when her motorbike was hit by a car early yesterday, making her the sixth road accident fatality in the first four days of the “Seven Days of Danger” holiday road-safety campaign in Phuket.

According to DDPM-Phuket, Ms Kireeva’s motorbike was hit by a Mitsubishi Pajero on Chao Fa West Rd in Wichit at about 6:30pm.

Also injured in the accident, which occurred near the Sukko Spa, was 49-year-old Russian Andrey Sergeyvech.

It was not reported which of the Russians was operating the vehicle, which the DDPM-Phuket said made a dangerous overtaking maneuver to cause the collision

Two other fatalities occurred on New Year’s Day yesterday, bringing the running total to six, already two more than the target figure of four for the entire seven-day period.

The other fatalities were identified as:

Surapong Changsan, a 32-year-old from Koh Kaew, whose motorcycle slammed at high speed into a utility pole near the Premium Outlet Mall on the bypass road at 4:30am. There were no other vehicles involved, according to the DDPM-Phuket.

Prachai Khumboon, a 44-year-old from Pa Khlok, who tried to cross Thepkrasattri Road on foot and was killed instantly when run over by a fast-moving Toyota Altis, which could not brake in time due to rainy conditions.

The accident occurred at the u-turn near the Provincial Electricity Authority (PEA) plant in Baan Lipon, Thalang.

The bodies of all three victims were sent to the Vachira Phuket Hospital morgue.

In addition to the fatalities, there were also 22 road accident injuries requiring hospital admittance.

In addition to Mr Sergeyvech, other foreign casualties included:

Gerhaed Grasslen, a 67-year-old Australian whose motorbike collided with another motorbike in front of DaVinci’s pub and restaurant on Saiyuan Road in Rawai at 2am. The DDPM-Phuket listed Mr Grasslen as drunk and operating an unroadworthy vehicle at the time of the crash.

Cario Raimondi, a 59-year-old Italian who crashed his vehicle on Pisit Goranee Road in Patong at 10am while still under the influence of alcohol, according to the DDPM-Phuket.

Patrick Arrook, a 36-year-old Australian who crashed at 8pm in Patong in an accident attributed to wet weather.

The figures more than doubled those of the first four days of last year’s campaign, when three died and 20 were seriously injured in 20 accidents.

However, the total percentage of accidents attributed to drunk driving was down significantly, from 34.6% last year to 15.5% this year, according to DDPM-Phuket figures.

The police effort to stem the carnage by setting up a network of over 50 checkpoints resulted in 32,882 vehicles being pulled over for inspection during the first four days. Of these, 2,376 drivers were charged with violations.

Parents hold onto hope as boy lies comatose in Phuket