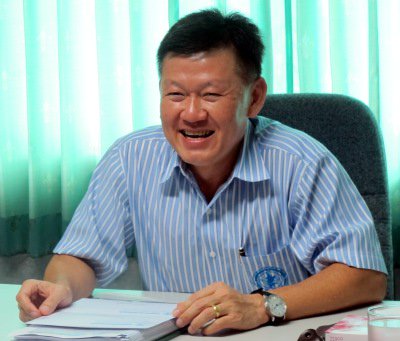 The handover was made at a small ceremony at the PTA office on the bypass road in Rassada on Tuesday.

PTA Vice President Bhuritt Maswongsa stressed that although the stabbing was an isolated incident, it nevertheless raised serious concerns about the safety of Phuket as a tourist destination.

More than 400,000 Australian tourists visited Phuket in 2011, the vast majority enjoying their stays without incident, he said.

“It was due to the excellent cooperation among the Phuket Provincial Police and Police Region 8 investigation departments that the suspects were arrested within five days,” Mr Bhuritt said.

PTA President Somboon Jirayus admitted that intense media coverage of the killing and subsequent investigation in Australia had “put a great deal of pressure” on the Phuket tourism industry and that of Thailand as a whole.

“However, the quick arrests in the incident reduced the pressure a lot. We have received many emails from Australian travel agents asking us to thank the police,” he said.

Phuket Provincial Police Deputy Commander Sakchai Limcharoen said police would continue their efforts to ensure tourist safety under the “Phuket Model” initiative, the first phase of which is aimed at identifying “danger zones”.

Among the zones targeted will be those where tourists often complain about having been the victims of intimidation, extortion or assault by tuk-tuk drivers and jet-ski rental operators.

The issue of violence against tourists by tuk-tuk drivers in Phuket has also emerged as a diplomatic issue, with Australian Ambassador to Thailand James Wise last month calling for police to launch an island-wide crackdown on weapons – including those carried by tuk-tuk drivers.

To vote in the current online poll on the potential effectiveness of the “Phuket Model”, click here.

If you have already voted and wish to view the latest results click here.