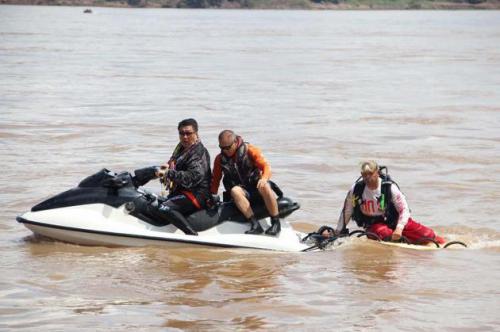 The Royal Thai Navy sent a 14-strong team, including nine divers, to help with retrieving the bodies and recovering the plane’s wreckage from the Mekong River, according to Navy spokesman Rear Admiral Karn Dee-ubon.

“So far we have found 14 bodies, but we haven’t identified them yet,” Suttinan told Radio Thailand. Some bodies were found as far as 20 kilometres from the crash site.

Most of the remaining bodies were believed to be trapped inside the aircraft, which divers were having trouble entering because of the turbulent waters and strong currents in the Mekong River, he said.

Thai police have dispatched a team of officials from the Forensic Science Office to help with identification of the crash victims, Royal Thai Police spokesman Maj-General Piya Uthayo said. The team included three officers of the rank of general who would help with DNA testing and fingerprint examination.

All 49 people on board Lao Airlines flight QV301 – 44 passengers, including five Thai nationals, and five crew members – were presumed dead in the crash, according to a statement released by the airline.

The doomed ATR-72 had flown from Vientiane and was approaching Pakse Airport when it came down in stormy weather, sinking to the bottom of the Mekong’s swollen waters. French-Italian aircraft manufacturer ATR said the twin-engine turboprop plane was new and was delivered in March.

According to a passenger list from the airline, aboard were 16 Laotians, seven French travellers, six Australians, five Thais, three South Koreans, two Vietnamese, and one national each from the United States, Canada, Malaysia, China and Taiwan. Australia said a family of four was among its nationals feared dead.

In Pakse, workers battled hazardous conditions in the search for bodies. As they scoured the river for the submerged plane, a crane perched on a floating platform in the Mekong was on standby to try to winch up the aircraft.

About 10 boats of varying sizes plied the fast-flowing waters, and divers from a Thai rescue team were on the scene to assist.

“It’s difficult to dive because there is a strong current. So I think it’s 50/50 that we will find something,” said Thai rescue diver Aniwat Plaeng-ngaan, 20.

Crowds of local people, monks and security personnel watched from the banks of the Mekong. Some recounted seeing the plane in trouble before it came down. “I heard a ‘boom!’ – a sound like a bomb going off. There was smoke and flames before it crashed,” said local village chief Buasorn Kornthong, 37.

Some debris was seen floating along the river and suitcases were wedged in mud on the riverbank.

“The plane was about to land but appeared to be hit by a strong wind, causing its [nose] to ascend and pushing it away from the airport area and out of reach of the air traffic control radar,” state-run Laotian news agency KPL quoted a witness as saying.

Meanwhile, France will send investigators to Laos to aid the investigation into the plane crash, which is the worst fatal air accident this year, Bloomberg reported. The ATR 72-600 turboprop plane is made by Avions de Transport Regional, a venture owned by Airbus SAS parent European Aeronautic, Space and Defense Co and Italy’s Finmeccanica SpA.

The panel will comprise Lao Airlines staff, national and local authorities and investigators from ATR, the French-Italian manufacturer of the aircraft involved.

Somphone blamed bad weather for the crash of the ATR-72 turboprop, which plunged into the Mekong River eight kilometres before reaching its destination of Pakse, killing all 49 passengers, including five Thais, and crew.

“My deepest condolences go out to all families affected by this accident,” Somphone said.

Flight QV 301 had taken off from the Laotian capital Vientiane bound for Champasak province in the south, but crashed making an attempt to land during bad weather whipped up by Typhoon Nari.

Somphone said the bad weather was the main factor contributing to the crash, as the aircraft was relatively new, having been delivered from the factory in March.

“We are following procedures set out for cases of emergency in supplying further information to the victims’ relatives and families,” he said.

The state-run airline will compensate the families for the loss of their loved ones, added Somphone, noting that the aircraft was fully insured. This crash was the second this year in Laos, after a DHC-6 Twin Otter 300 belonging to another state enterprise, Lao Air, crashed at Sam Neua Airport in April injuring five.

Wednesday’s air crash was the most serious in Laos since 1998, when a Yakovlev-40 carrying a Vietnamese military delegation crashed in northern Xiangkhoung province during a heavy rainstorm, killing 26.

Yesterday, the crash site on Donkhor Island in the Mekong River drew crowds of onlookers, who witnessed the mudslide and fallen trees that marked the spot where the ill-fated aircraft came down.

All that was visible of the plane itself was a wing and some luggage, as the area was sealed off from onlookers. Both the Thai and Laotian rescue teams have stated that the rest of the wreckage has not yet been fully investigated.

“We’ve been cooperating with Thai rescue divers in the search for bodies. I don’t think there will be any survivors,” said Xaysana Visatathe, of the Champasak response team.


Last messages from victims cause stir
The Nation / Phuket Gazette
PHUKET: Messages retrieved from the LINE chat app sent out by a Laotian stewardess prior to the ill-fated flight QV301 were distributed online yesterday, drawing heartbreaking comments from Thai and Lao netizens mourning her death and deploring the accident.

Kaysone Phonelat, who would have turned 24 to