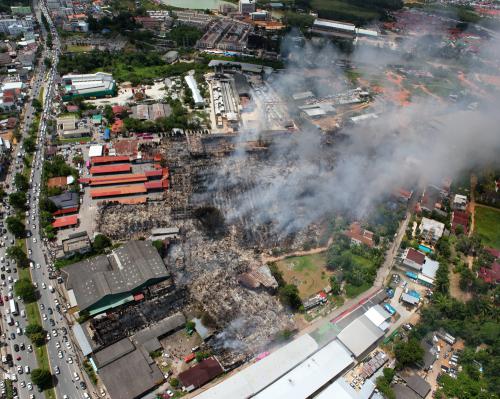 PHUKET: Officers from Region 8 Police Forensics arrived at the aftermath of the Phuket SuperCheap inferno just before 4pm today.

Within minutes, the team of investigators began their search for victims near the main entrance at the front of the store, and looked for possible causes of the fire.

SuperCheap management and the police have yet to issue any public statements about the blaze, which began a little after 9pm last night (story here).

Police so far have avoided making any estimates of the possible number of people who may have died in the fire.

However, the Phuket Social Security Office confirmed to the Phuket Gazette earlier today that 2,736 Thais and 700 migrant workers are registered as employed by the store.

Firefighters battled the blaze for 15 hours through the night (story here), and three fire trucks remain on standby.

“There are still small fires burning within the complex which may flare up as there are still stocks of combustible materials inside,” one firefighter explained to the Gazette.

The area remains sealed off to the public with police officers stationed to guard the perimeter overnight.

Dark skies began gathering over Phuket this evening, with rain expected to fall across the island tonight.

The weather may hamper the forensic team’s search for clues and force the officers to delay their search until first light tomorrow.