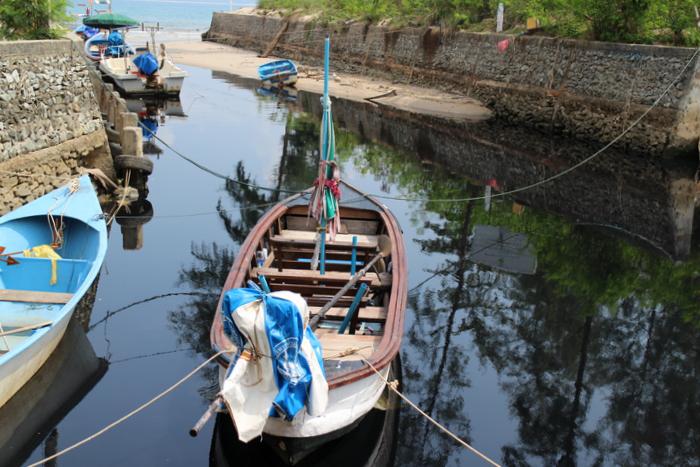 PHUKET: As black water continues to spill over Bang Tao Beach in Cherng Talay, local officials report that the 320-million-baht wastewater-treatment project scheduled for completion next year has stalled.

“Our big wastewater treatment project is only 30 per cent complete, but construction has now stopped,” Ma-ann Samran, president of the Cherng Talay Tambon Administration Organization (OrBorTor), said on Saturday.

“The company said that the cost of living in Phuket is too high and some of their staff couldn’t afford to live here, so they returned to their home provinces.

“I have been in touch with the company and still believe the project can be finished in two to three years [story here].”

The explanation of the faltering wastewater plant project was delivered to Phuket Governor Maitri Inthusut during the governor’s inspection of the Bang Tao Canal and the beach.

However, Mr Ma-ann was not called on to explain when construction ground to a halt or what penalties – if any – the company would face for defaulting on a government contract.

Despite the color of the water and the BOD readings, Governor Maitri washed his hands and face in the water and declared it safe to swim in.

Mr Ma-ann assured that a slew of short-term solutions will be put into effect, including inspections of local establishments (story here) to make sure wastewater is treated before it is released into the canal.

“We are targeting 10 unregistered restaurants and some laundromats that we believe are releasing untreated water,” Mr Ma-ann said.

Although local boatmen said that they believed hotels in the area were also releasing untreated wastewater, no hotels were mentioned at the inspection.

Officials announced other steps aimed at preventing black sediment from reaching the beach and improving water flow in the canal.

Steps will be built of wood or sand bags into the base of the canal to trap sediment as it flows by, and a section of canal 1.6km long will be dredged and the sides reinforced, Mr Ma-ann said.

“We’ve already received 15mn baht for that project,” said Mr Ma-ann, “but we don’t have any bids for it yet.”

Another 1.5mn baht has been secured to dredge 200 meters of the canal near the sea where longtail boats are berthed.

Wastewater flowing through the canal and onto the beach at this time last year drew national-level attention.

BOD readings were also well over the legal limit and visiting government spokesman Prompong Nopparit ordered the Cherng Talay OrBorTor to set up a task force to inspect businesses along the canal to ensure that they had adequate wastewater-treatment tanks installed (story here).