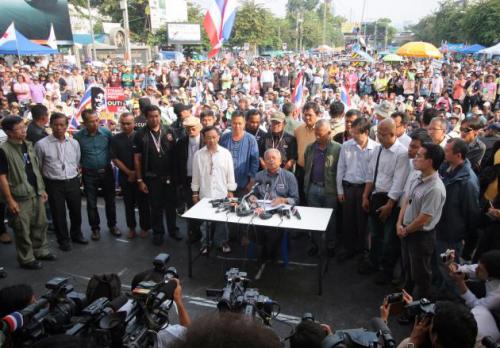 
Six killed, 10 hurt in 2 attacks in South
The Nation / Phuket Gazette
PHUKET: Five soldiers were killed and 10 others injured – four seriously – in a bomb attack yesterday in Pattani’s Kapho district, while a police officer was gunned down earlier in Yala’s Muang district. Police investigators have put the two attacks down to the ongoing unrest in the region.

Up to 15 soldiers were travelling in a six-wheel truck from their base in Kapho district to take a break at the Army Region 4’s Ingkayut Borihan camp in Nong Chik district as part of a five-vehicle convoy. However, when the convoy drove past Ban Makor School in Plong Hoy sub-district at noon, a bomb placed inside a 30-kilogram gas cylinder and buried under the road, exploded sending the six-wheeler crashing into a tree.

Police investigators suspect insurgency sympathisers had carried out this attack.

Earlier the authorities received a report that an unknown group had brought several home-made bombs into Kapho and Sai Buri districts.

The victim, who had survived an earlier attack, was driving to work at the Krong Penang Police Station via the Malayu Bangkok-Pong Yeurai bypass when two men on a motorbike opened fire at him at 7.54am. Montree died instantly and his attackers fled with his pistol and rifle. Police blamed separatists for this shooting.

At 3.45pm yesterday, an unknown group of armed men opened fire at two men – Jeh-usenf Awae, 25, and Russalan Ma-ae, 20 – while they were watching TV at home in Pattani’s Yarang district. Around the same time, villager Lasi Panoh, 35, was shot and injured in Khok Pho district. Police are investigating to see if the shootings are related to insurgency.


Suthep says top brass ready to talk
The Nation / Phuket Gazette
PHUKET: Suthep Thaugsuban, secretary-general of the People’s Democratic Reform Committee (PDRC), said last night he may meet with top military and police brass today as they had accepted his request, if the meeting is approved by the supreme commander, whom he also wants to meet.

The anti-government protest leader said he had, yesterday afternoon, requested to meet the supreme commander and commanders of the Army, Navy and Air Force as well as the commissioner-general of the National Police. In his speech last night, he said he had been trying to reach Supreme Commander General Tanasak Patimapragorn all day but in vain.

Suthep said he would wait until 8pm today and would not push for a meeting. He also cited his phone conversation with police chief General Adul Saengsingkaew, saying the police chief had agreed to meet him today though the venue and time had not been decided upon.

Also yesterday, Suthep said the PDRC planned to make its stance clear and propose solutions and objectives for political reform, and also give the five military and police officers a chance to ask about the PDRC’s plans so they can decide whether to side with the general public and PDRC supporters.

The PDRC is also seeking a similar meeting, at an unspecified time and date, with representatives of the private sector, mainly professional regulatory bodies and civil society, to discuss its objectives and its stance on non-violence, peace, tolerance, openness and an unarmed campaign to free Thai politics of corruption and abuse of power.

Meanwhile, caretaker Prime Minister Yingluck Shinawatra said she was hoping the military would stay neutral politically and abide by His Majesty’s speech on December 5 calling all sides to serve their duties. “If everything is run under rules and regulations, I believe all government officials will obey them,” she added.

Army chief General Prayuth Chan-ocha has earlier called on all Thais to observe the rule of law and principles to bring an end to these perennial political conflicts, deputy Army spokesman Colonel Winthai Suvaree said.

“The best way is to find a path that everyone can move along together, bridge the political divide. In reality, people win some and lose some. We have to strike a balance and find a middle path that all sides can accept,” Winthai quoted Prayuth as saying.

Prayuth is concerned that as civic groups and the public and private sectors are split over how to break through the current political impasse, they cannot strive towards a real solution if they fiercely believe in their own scenario.

“If this situation can be eased quickly, people can go back home and make a living as well as develop the country. The military will also carry out its duty,” Prayuth was quoted as saying.

Generals Prayuth, Prawit Wongsuwan and Anupong Paochinda had not spoken to Suthep and saw no reason for dialogue as the military knows its own role, Winthai said.

Prayuth has been very cautious in his support to help tackle the country’s political crisis by not injecting his personal opinions and urging all parties to avoid breaking the law and resorting to violence or confrontation, he added.


NACC to investigate backers of charter change draft
The Nation / Phuket Gazette
PHUKET: The National Anti-Corruption Commission (NACC) will meet today to consider the fate of the 312 members of the House and Senate who backed the draft legislation – since ruled by the Constitutional Court to be unconstitutional – to amend the charter in order to change the make-up of the Senate.

Vicha Mahakhun, an NACC commissioner, said yesterday the agency would open its first inquiry and launch an investigation process to find out whether these lawmakers had committed wrongful acts. Later, they will invite both complainants and defendants to testify.

He said the inquiry would take around one month, but he could not say whether the case would be finished before February 2, the day of the next election.

Commenting on the “People’s Council” called for by anti-government protest leader Suthep Thaugsuban, Vicha said that this could be done through an executive decree and the caretaker government could be allowed to proceed with such a move as a possible way out of the political impasse. He said such a council would be responsible for political reform, but could not act as an alternative House of Representatives.

He disagreed with a proposal for a royally appointed prime minister, saying there was no law allowing such a move.

Asked whether caretaker Prime Minister Yingluck Shinawatra could step down, as demanded by the protesters, Vicha declined comment, but recalled that this had happened when Thaksin Shinawatra was in power. Thaksin had stepped down as caretaker prime minister, with Pol General Chidchai Vanasatidya appointed to perform prime ministerial duties