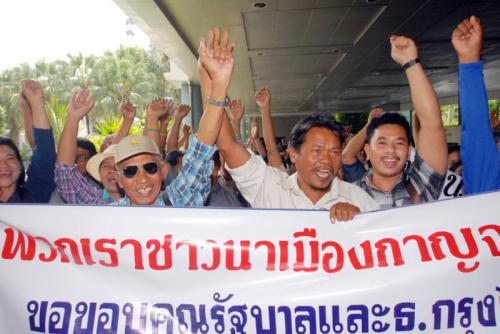 
Most banks say deposits normal after Bt30 billion pulled from GSB accounts
Phuket Gazette / The Nation
PHUKET: Major private banks have not detected a wave of deposits, even though 30 billion baht in cash was withdrawn by customers of the Government Savings Bank (GSB) yesterday.

The bank has a business continuity plan if it sees a run on deposits. However, its customer base consists mainly of businesses with payroll accounts and SMEs, unlike the GSB, which has mostly retail depositors, Mr Weidt added.

Noppawan Jermhansa, a first senior vice president at Kasikornbank, said KBank has not noticed a larger-than-normal flow of new money.

The bank renewed the campaign following its initial plan not to acquire depositors from other banks or the GSB.

“This deposit product is designed to tap the mass segment who have savings discipline,” she said.

Bangkok Bank was an exception, with savings rising even though it did not launch a special deposit campaign.

Pochanee Kongkalai, an executive vice president, said the bank found deposits increasing from the wealthy, middle-class and mass segments. It is highly possible that the new depositors were customers moving over from the GSB.

Suthimon Voravit, an officer of a private company and a GSB depositor, said she withdrew funds from her account at the GSB because she felt uncomfortable leaving her money there after the bank granted a loan to the Bank of Agriculture and Agricultural Cooperatives (BAAC).

She said she would shift her savings to other banks, but if they have extended credit to BAAC like the GSB did, she might consider pulling out her money from those banks and investing in gold.


‘We will still retake Govt House’ : Chalerm
Phuket Gazette / The Nation
PHUKET: The Centre for Maintaining Peace and Order (CMPO) still plans to re-take the Government House as the first target of its operation to reclaim five areas occupied by the People’s Democratic Reform Committee (PDRC), even though anti-government protesters walled up the gates to the compound yesterday.

For the sake of transparency, Labour Minister Chalerm Yoobamrung, the CMPO director, has instructed the Public Relations Department to produce a special programme called “Peace for Bangkok Mission” for live broadcast of the reclamation mission on channels 11 and 9, deputy government spokeswoman Sunisa Lertpakawat said yesterday.

Mr Chalerm said Prime Minister Yingluck Shinawatra had instructed him not to resort to violence.

Depending on the situation, the CMPO would decide on whether or not to retake all of the five PDRC rally sites – Government House, Government Complex on Chaeng Wattana Road, Democracy Monument, Energy Ministry and Interior Ministry.

Mr Chalerm shrugged off the pre-emptive move by Suthep Thaugsuban, secretary-general of the PDRC, to forestall the government’s plan to return to work at Government House.

Mr Suthep yesterday led a group of PDRC followers to seal off Government House. They were joined by the Students and People’s Network for Thailand’s Reform, which is camping out near Government House, in putting up concrete and sandbags in front of two gates of the seat of government.

The PDRC’s move was prompted by Mr Chalerm’s vow on Sunday to reclaim five PDRC bases and Ms Yingluck’s aim to resume work at her regular office tomorrow. Ms Yingluck has been using the office of the Defence Ministry’s permanent secretary as her temporary workplace sometime after the anti-government rally started.

Mr Suthep said Ms Yingluck was acting at the recommendation of her soothsayer that she resume work at Government House on Wednesday.


EC and Govt fail to agree on date for further voting
Phuket Gazette / The Nation
PHUKET: The Election Commission (EC) and government ministers failed to reach an accord yesterday for when a new round of voting should be held to fill remaining seats for MPs in the House of Representatives.

EC member Somchai Srisuthiyakorn met with some Cabinet members and legal advisers from the Pheu Thai Party to discuss problems stemming from the February 2 election, which was marred by protests and disruptions.

Caretaker Justice Minister Chaikasem Nitisiri and Pheu Thai legal adviser Kanin Boonsuwan suggested that the new voting must be held on March 2, or no more than 30 days after the election.

They cited the Constitution, which requires that the House of Representatives convene within 30 days of a general election to elect a new prime minister. Mr Chaikasem said that the requirement must be met.

In the February 2 election, there were no candidates in 28 constituencies, all of them in the South, and voting could not be held at more than 10,000 polling stations around the country.

Mr Somchai said yesterday that the EC would petition the Constitutional Court on Friday if the agency and government failed to agree about the date for further voting.

He said the court was expected to make a ruling some time shortly before March 2, which would not leave the EC with sufficient time to prepare for new voting for the date nominated by the ministers.

Mr Somchai described yesterday’s meeting with Cabinet members and Pheu Thai legal experts as “one of the best” between the EC and the government.
MP gives evidence against PM at anti-graft agency
Phuket Gazette / The Nation
PHUKET: Former Democrat MP Warong Dechgitvigrom is confident his testimony yesterday to the National Anti-Corruption Commission (NACC) on alleged corruption by caretaker Prime Minister Yingluck Shinawatra in relation to the rice-pledging scheme will help speed up the case against her.