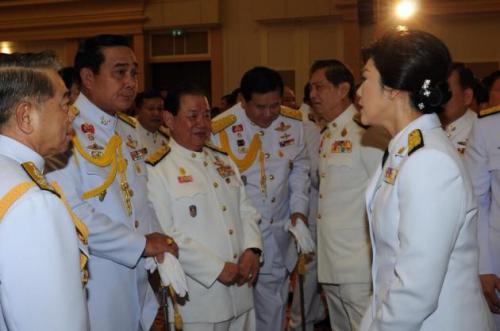 The protesters were seen moving cement barricades earlier blocking their ways at both venues.

Protest leaders declared the victory at the Rajdamnoen rally site, saying their long fight against the government has been accepted by the public and the government. The declaration was also announced at other rally sites.

“Victory is ours after the long fights and protests,” Sathit Wongnongtoey said from the stage.

Protest leaders encouraged people throughout the country to come out and join the celebrations.

However, the protesters refused to enter the police compound. They instead marched around the venue, apparently out of concern that police would trap them inside.


PM Yingluck talks to Army Chief Prayuth
The Nation / Phuket Gazette
PHUKET: Prime Minister Yingluck Shinawatra today spoke with Army chief Prayuth Chan-ocha during the ceremony of oath taking to be good government officials on the occasion of His Majesty the King’s on December 5 at the Army’s Club.

Prime Minister Yingluck then chaired the weekly Cabinet meeting at the Army’s Club. After the meeting, she refused to give an interview to the media, saying the Center for Administration of Peace and Order will explain the current protest situation.

However, protest leader Sathit Wongnongtoey today warned at the Rajdamnoen rally site that police should not do that because the bureau is very near Government House.

“Listen carefully, if Khun Suthep is arrested, don’t underestimate the protesters. The bureau is near Government House. Think twice before doing anything,” Sathit said.

Suthep was charged with treason yesterday, as a helicopter flew over the Rajdamnoen rally site and distributed copies of Suthep’s warrants.

He said he would allow the protesters to reach and seize the bureau.

Gen Khamronvit said he has not been removed as the commander in charge of forces dealing with the protesters. He said he had instructed police to open the line and clap to welcome the protesters when they arrive.

“There will be no clash today. If the protesters want to seize the Metropolitan Police, let them,” Thai Rath quoted Khamronvit as saying. “I’ve told my subordinates not to fire teargas. If anything happens, I’ll take responsibility.”

He added that the prime minister also gave cash of Bt2 million for him to distribute to police officers on duty.