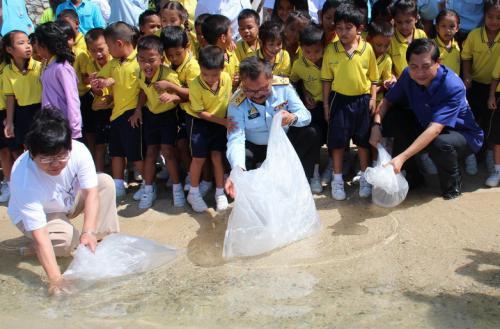 PHUKET: More than 500,000 marine animals were released in Phuket on Sunday to celebrate the 86th birthday of HM King Bhumibol Adulyadej on December 5.

Among the animals were over 100 brownbanded bamboo sharks, released as part of an effort to rebuild declining shark numbers in Thai seas.

Five species of shark were added to the Endangered Species list at the Convention of International Trade of Endangered Species (CITES) in Bangkok earlier this year, and the drastic reduction in their numbers is behind the creation of the Thailand E-Shark project, which aims to document shark sightings in Thai waters between November 1, 2012 and April 30 next year (story here).

“In addition to honoring HM The King, we are attempting to rebalance the marine ecosystem,” said Phuket Marine Biological Center Director Ukkrit Satapoomin.

In addition to the animal release, the Phuket Aquarium is also honoring HM The King by providing free admission to the aquarium until December 5 – for those who come with their fathers, said Mr Ukkrit.