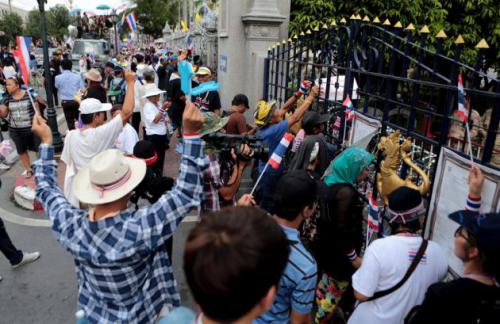 Thousands of demonstrators, protesting against a government-backed bill for blanket amnesty in political cases and vowing to “root out the Thaksin regime”, yesterday surrounded the ministries of Interior, Agriculture, Transport, and Sports and Tourism.

On Monday, the protesters began their occupation of the ministries of Finance and Foreign Affairs, and the Public Relations Department.

Yesterday’s siege forced officials at the centres to leave work early. Protesters locked the gates of the ministries of Agriculture, Transport, and Sports and Tourism with chains before moving to besiege the Interior Ministry, according to Metropolitan Police spokesman Maj-General Adul Narongsak.

The protesters surrounding the Interior Ministry left the area at around 6pm.

The Criminal Court yesterday approved an arrest warrant for the key protest leader, Suthep Thaugsuban, in connection with the occupation of government buildings. Suthep recently resigned as an opposition Democrat Party MP to head the rallies.

Police charged him with involvement in an illegal gathering and trespass on a government agency.

In the House, opposition and Democrat leader Abhisit Vejjajiva launched a no-confidence motion against Yingluck with an attack on her government’s rice-pledging scheme. He also questioned her integrity following failures to keep promises on policy platforms.

Opposition MPs accused the government of undermining economic stability though its populist policies.

Yingluck yesterday reiterated that authorities would not use violence against the protesters. “Everybody must obey the law and not use mob rule to subvert the rule of law,” she told reporters.

Adding to tensions in the capital yesterday, an unexploded hand grenade was discovered outside a Democrat Party office in Phra Khanong district.

The Finance Ministry yesterday planned to use the civil service centre on Chaeng Wattana Road as its temporary office in the face of the ongoing occupation of the ministry compound by the anti-government protesters.

The permanent secretary for Finance, Rangsan Sriworasart, said yesterday the ministry and related offices had contingency plans to deal with crises such as this, to ensure that normal work routines would not be affected. Computer/data backup centres are scattered in several locations to diversify potential risks that could affect the ministry’s daily operations.

The ministry has a risk-management system similar to those of commercial banks, Rangsan said. Such systems allow information/computer systems at various sites to fill in for those that cannot perform normal operations due to external factors, Rangsan said.

The ministry has several information systems and data-backup centres in various locations to ensure there is no disruption of work, including payment of salaries to ministry staff. However, instalment payments for services performed by state projects’ contractors, as well as hiring, and procurements by state agencies, could be affected as they are not part of the routine automatic-payments system of the ministry, the official said.

Tourism and Sports Minister Somsak Pureesrisak yesterday ordered the movement of its two offices – the Office of the Minister and Office of the Permanent Secretary – to the Department of Physical Education to maintain its workflow after the ministry building was seized by political demonstrators.

Officials were allowed to go home and work anywhere they could be reached by telephone and online communication. Somsak acknowledged they could not remove some documents from their offices.

Suwat Sitthilor, permanent secretary of the Tourism and Sports Ministry, said officials were asked to leave the ministry before its entrance was closed. They were not let back in again due to safety concerns.

Somsak acknowledged the political demonstrations had impacted on the country’s image as a tourism destination and could lead foreign tourists to postpone plans to come here.

Political observers yesterday saw it as a good sign that Abhisit and the Democrats had attended Parliament for the censure debate, instead of resorting to street politics.

“I think by attending the debate, Abhisit is sending a signal to Yingluck that there is room for political dialogue to end the street protests,” said Panitan Wattanayagorn, a political scientist at Chulalongkorn University. “Abhisit and Yingluck must come together and calm down the protests,” he said.

Mahidol University peace expert Eakpant Pindavanija said he feared there was a high chance of bloody confrontation in the days ahead.

“The solution is hard [to find],” he admits, adding that peace groups are working behind the scenes to convince both sides not to resort to the use of force. Eakpant deplored the seizure of state offices, calling it a mistake for the anti-government protests.

Thammasat University rector Somkid Lertpaitoon yesterday suggested the government should consider a House dissolution and a fresh election as a way to restore peace in the country.

He said there had been no signs of peace in sight as the government insisted on employing legal measures to deal with the crisis.


Travel warnings may cost tourism B25bn
The Nation / Phuket Gazette
PHUKET: he tourism industry could lose Bt25 billion in revenue next month if countries issue their highest warnings against travelling to the Kingdom, said Sugree Sithivanich, deputy governor for marketing communications of the Tourism Authority of Thailand (TAT).

If that were to happen, the number of foreign arrivals in December would drop by 8-10 per cent year on year. That would mean that for the whole of 2013, the number of arrivals would be only 25.75 million, down from 26.1 million as projected previously.

If such a situation lasted into the first quarter of 2014, the number of foreign tourists could be expected to grow by just 7 per cent year on year. Previously, the TAT expected arrivals to increase by 13 per cent to 28.01 million next year. However, tourism revenue would be about the same as projected previously, with an increase of almost 13 per cent to about Bt1.326 trillion.

Still, Sugree said that if this scenario transpired, only one to three months would be needed for a recovery, thanks to the quick rebound of short-haul foreign tourists.

If the scenario got even worse, like in 2008 when Suvarnabhumi Airport was shut down by protesters, the tourism outlook would be hit even harder. According to the TAT’s projection, the number of foreign tourists would plunge to 650,000 in December, a decline of 18-20 per cent year on year, with a corresponding revenue loss of Bt27.9 billion. As a result, the total number of foreign tourists in 2013 would be just 25.55 million.

Sugree said it was hard for the TAT to analyse the situation because the political landscape is still cloudy, as is the probable impact with tourism. The degree of its impact would depend on the situation. For example, if there are casualties or the use of tear gas to disperse demonstrator