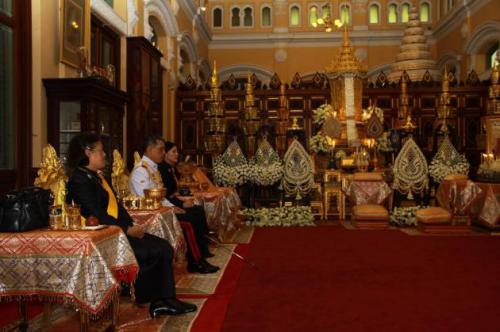 PHUKET: Thailand yesterday began a 30-day period of national mourning over the passing away of His Holiness the Supreme Patriarch Somdet Phra Nyanasamvara, with flags being flown at half-mast and thousands of mourners turning out to pay their respects.

The government yesterday extended the mourning period from 15 days announced earlier in the day to 30 days, according to Prime Minister Yingluck Shinawatra. She said that in addition to flying the flags at half-mast, state agencies and public officials were instructed to wear black for 30 days.

Yingluck said she made the instruction in a Prime Minister’s Office’s order issued yesterday.

Earlier yesterday, the Prime Minister’s Office announced in the Royal Gazette that a 15-day mourning period would be observed from yesterday until November 8. The period was later extended until November 23.

The government yesterday asked all groups of people to observe mourning during that period, according to the announcement.

His Majesty the King yesterday instructed royal family members and palace officials to observe 30-day mourning from yesterday to November 23, according to the Royal Household Bureau.

The head of the Kingdom’s Buddhist monastic order passed away at 7.30pm on Thursday due to a blood infection following recent surgery for an intestinal infection. His body yesterday was moved from Chulalongkorn Hospital, where he had been receiving treatment, to Wat Bowonnives Vihara, where he had served as an abbot.

An estimated 3,000 people gathered solemnly along the roads as the Supreme Patriarch’s body was moved from the hospital to the temple shortly after noon. Several hundreds of mourners lined the busy road outside the hospital, from where the body of the Kingdom’s top Buddhist leader was due to be shifted to the temple for religious ceremonies. People of all ages – from school students to frail old women – crouched respectfully next to the heavy traffic. Most were dressed in the mourning colours of black or white.

The Supreme Patriarch’s body was transported in a motorcade from the hospital via Ratchadamri Road, Rama IV Road, the expressway, the Urupong intersection, Phetchaburi Road, Lan Luang Road, the Phan Fah intersection, and the Wan Chat intersection before arriving at the temple.

Lines of military and police cadets, in white suits, lined up on both sides along the road from the Wan Chat intersection to the temple. Behind the lines of cadets were large groups of mourners.

White and black cloth covered the perimeter walls of Wat Bowonnives. Houses and buildings around the temple displayed photos of the Supreme Patriarch. Local residents wore black in mourning. Many shops in the area agreed not to sell alcoholic drinks.

The Supreme Patriarch was a friend of His Holiness Dalai Lama of Tibet, who called him “my elder brother”.

In a related development, different political groups yesterday decided to suspend their activities out of reverence for the Supreme Patriarch.

The Students and People’s Network Reforming Thailand, in a comment posted on the group’s Facebook page, said they would not hold any entertainment activities at their rally site out of reverence for the Supreme Patriarch.

The V for Thailand group also posted on Facebook that it would put its activities on hold.

The Democrat Party has also cancelled its “Reveal the Truth” rally scheduled for today in mourning and will meet again next Saturday at Wat Chan Pradittharam in Bangkok’s Phasi Charoen district.

Meanwhile, the red-shirt faction Red Sunday plans to go ahead with its rally at the Ratchaprasong intersection tomorrow as scheduled to voice its opposition to the revised amnesty bill, the group’s leader Sombat Boonngam-anong said yesterday.

Sombat said that though the rally was going ahead, he would also rely on social media to launch a “virtual rally” as well as talk to supporters via Facebook and Twitter.

He added that he would be wearing a red shirt, but he was not bothered what colours the other protesters wore.

Suriyasai Katasila, a key member of People’s Assembly Reforming Thailand said the group would meet on Sunday as scheduled but before it starts it would do a mourning ceremony for the Supreme Patriarch first.

In Memoriam: the Supreme Patriarch of Thailand
The Nation / Phuket Gazette

PHUKET: His Holiness Somdet Phra Nyanasamvara, the Supreme Patriarch of Thailand (Suvaddhana Mahâthera) whose birth name is Charoen Gajavatra was born in Kanchanaburi Province, on October 3, 1913.

His Holiness was ordained as a novice when he was 14 years old at Wat Devasangharam in Kanchanaburi. Then he enrolled for Dhamma study at Wat Bovoranives Vihara until he aged fully for the monkhood.

His Holiness was ordained as a Buddhist monk at Wat Bovoranives Vihara on February 15, 1933 by His Holiness Prince Kromma Luang Vajiranyanavamsa, and stayed there until he passed the ninth grade, the highest level of Pali examination as constituted by the Thai Sangha in 1941.

His Holiness had been moved through the lines of ecclesiastical promotion.

An enthusiastic learner, His Holiness has been keenly interested in education, especially the language studies, since he was a Pali scholar. He had learned and mastered several languages, such as English, French, German, Chinese, and Sanskrit.

His Holiness Prince Kromma Luang Vajiranyanavamsa, his preceptor, was concerned that he would overindulge in secular education, and therefore had reminded him to allocate his time for meditation. As a result, His Holiness had started practicing meditation ever since, and kept doing it consistently, making him a Mahathera who has been knowledgeable in both the Dhamma studies and practice.

As His Holiness is an expert in foreign languages, particularly English, he has obtained modern knowledge through reading English books, of both secular and religious subjects, thus making him a visionary person who always catches up with the country’s situations. That is a great benefit to his teaching and propagation of Buddhism. The religious books authored by His Holiness are up to date, and timely for people and the circumstances in modern days. Apart from that, he also has played a vital role in teaching the Dhamma to Thais and foreigners.

His Holiness has a far-sighted view on education. He was involved in the founding of Thailand’s first Buddhist University, “Mahamakut Buddhist University”, and for the first time initiated the Training Institute for Dhammaduta Bhikkhus Going Abroad.