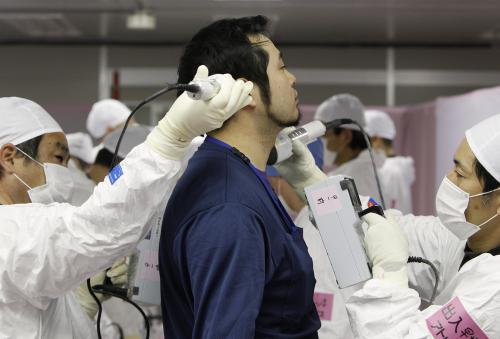 PHUKET: The operator of Japan’s wrecked Fukushima nuclear plant said on Saturday there was no damage or spike in radiation levels at the station after a large earthquake struck in the ocean east of Japan, triggering a small tsunami.

There were no immediate reports of damage on land from the quake, classified as magnitude 7.1 by the Japan Meteorological Agency, which struck about 370 km (230 miles) out to sea. Earlier the agency said the quake had a magnitude of 6.8.

A spokesman at Tokyo Electric Power Co (TEPCO), operator of Fukushima, said some workers had been ordered to evacuate to higher ground after the quake, but that there was no damage or change in readings at radiation monitoring posts around the plant.

Ships were seen leaving a port south of the Fukushima Daiichi nuclear power station, where three reactors had meltdowns in 2011 after an earthquake and tsunami knocked out cooling and power, as a precaution after the tremor. Buildings shook as far away as Tokyo, 230 km south of the nuclear plant.

The Japan Meteorological Agency issued a “yellow” warning shortly after the 1710 GMT quake that a small tsunami would reach the northeastern Japanese coast.

A yellow warning is issued when a tsunami is not expected to exceed a height of 1 metre (3 feet), far smaller than the wave that hit the Fukushima plant in 2011 and devastated large swathes of Japan’s eastern seaboard.

PHUKET: The United States said on Friday allegations that U.S. intelligence agencies tapped the mobile phone of German Chancellor Angela Merkel and others in France and Italy have “posed a moment of tension” with some allies and should not undermine cooperation on such issues as Syria and Iran.

“There is no question that the disclosure of classified information has posed a moment of tensions with some of our allies,” State Department spokeswoman Jen Psaki told reporters.

“We are having discussions with those allies,” she said referring to a visit next week by German intelligence chiefs to Washington to seek answers.

She said Secretary of State John Kerry discussed the accusations, based on allegations by fugitive ex-U.S. intelligence operative Edward Snowden, with officials in France and Italy during a recent visit to Europe.

Psaki said the leaks about U.S. intelligence activities had “created significant challenges in our relationships” with allied nations and a “public distraction.”

“He (Kerry) certainly recognizes that as we look to pursue a range of diplomatic priorities, whether that is working on global issues like Syria, or Iran, or (trade negotiations), it will really be a mistake to let these disclosures get in the way of that,” Psaki said.

Merkel has demanded that President Barack Obama address the issue following the accusations that the U.S. National Security Agency accessed tens of thousands of French phone records as well as monitoring her private phone.

Berlin plans to send officials from its intelligence agency BND to Washington, while members of the European Parliament have said they will fly to the United States on Monday to explore “possible legal remedies for EU citizens.

Washington is currently working closely with European allies on a host of pressing global issues, including negotiations to end a dispute with Iran over its nuclear program and bringing together warring parties for a peace conference in Syria.

PHUKET: Chilean Presidential frontrunner Michelle Bachelet said on Friday she is mulling reforms of land and water-use rules, in the latest hint of what may be in store for the copper powerhouse’s crucial mining and energy sectors.

Land-use plans need to be reformed to clarify where energy projects can be built and the country’s dictatorship-era rules on water usage need to be reviewed, Bachelet said.

The centre-left candidate, poised to cruise to victory in next month’s general election or a likely December runoff, has not yet provided the fine print of her keenly-awaited plans. But she put the spotlight on the need for a solid regulatory framework during a radio debate with eight other candidates vying for the presidency.

“We have to guarantee that environmental institutionality carries out what it’s meant to do,” Bachelet said.

“I’ve put forward a land-use plan, so that we define exactly where energy projects can be built, in collaboration with citizens,” said Bachelet, who was the country’s first female president from 2006-10.

A land-use overhaul would likely be cheered by big industry, which supports clearer rules.

A nebulous regulatory framework has allowed environmental and social groups to take to court even energy projects that are already approved, putting in limbo billions of dollars of investment. Massive coal-fired plants and hydropower investments in pristine Patagonia are particularly unpopular.

While the economy of the world’s No. 1 copper producer has roared on the back of a mining boom, Chile is now wrestling with how to distribute the spoils of the bonanza and protect its environment.

Bachelet also said she wants to review the Andean country’s water rules, which are widely seen as favourable to the mining industry.

Mining, which accounts for roughly 15 percent of the country’s gross domestic product (GDP), have “the right to use any water found during their work,” according to Chile’s Water Code, which dates from Augusto Pinochet’s 1973-90 military dictatorship.

Environmentalists say this is a form of privatizing water. The use of water is of rising concern after a series of droughts, exacerbated by the fact that much mining takes place in Chile’s mineral-rich Atacama desert.

“We have to do an important review of the water code,” Bachelet said. “The state has to first of all guarantee water for human use and without doubt also for production, especially for small-scale farmers,” she added.

Power-intensive miners are craving the specifics of Bachelet’s energy and mining plans, but details have so far been scant. She is poised to unveil more extensive policy proposals on Sunday.

An estimated 8,000 megawatts needs to be added to Chile’s 17,000 MW of power production capacity by the end of the decade, the government says.

Several coal-fired plants were approved under the moderate Bachelet’s government, drawing the ire of environmentalists and hurting her popularity with youth and green groups.

“Coal-fired thermoelectrics were clearly an obligation during the emergency when gas was ending,” Bachelet said, referring to a 2004 gas crisis with Argentina.

Bachelet, who appears to have swerved further left since leaving the La Moneda presidential palace, said she was betting on gas, small-scale hydropower, and renewable energies to combat steep power prices.

“We have to move toward gas-fired thermoelectrics, there are smaller-scale hydropower p